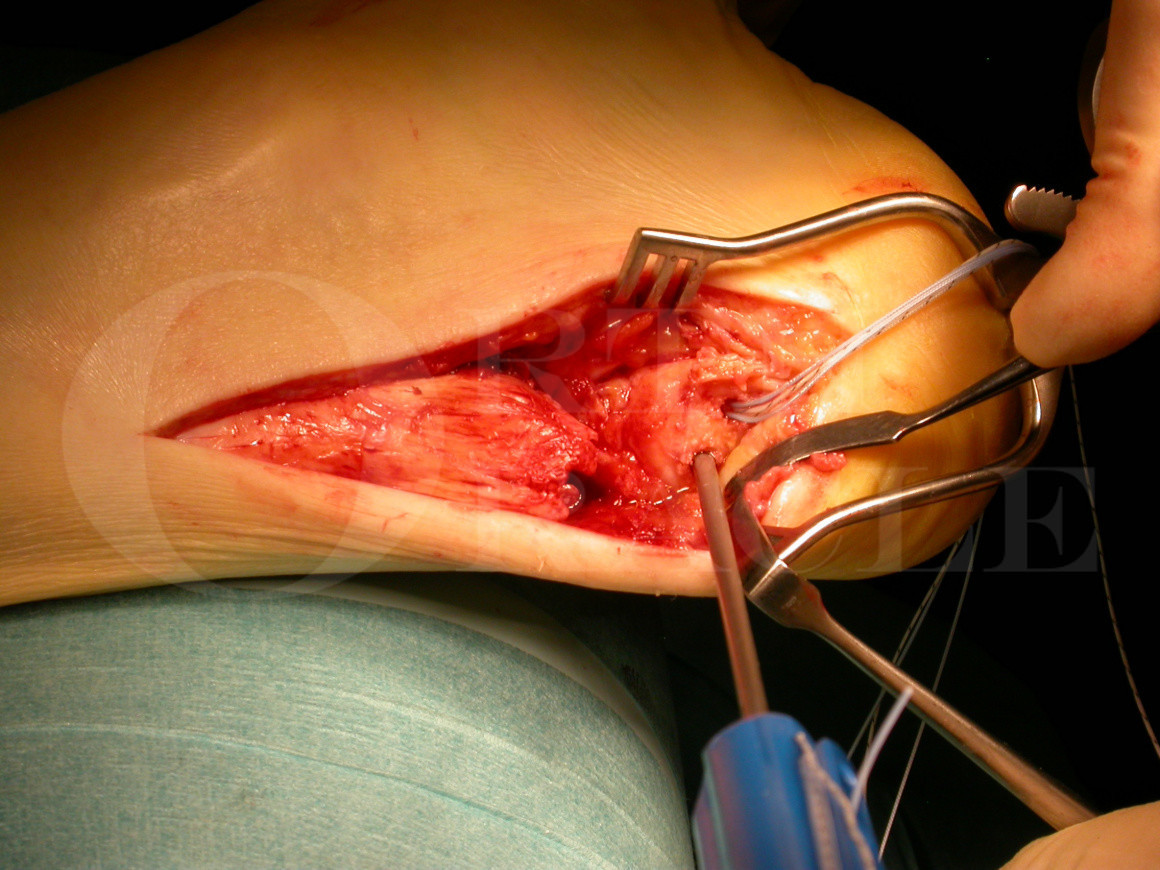 Achilles tendon ruptures are one of the most common sporting injuries encountered in the emergency department.

Reported incidence varies, between 11 and 32 per 100,000 population. Whilst the majority of injuries involve the mid-substance, a small number are avulsion injuries, where the achilles fails at the tendon insertion, this can occasionally involve an avulsion fracture of the calcaneum.

There is bimodal distribution of sleeve avulsions, the majority will occur in middle aged men during sporting activity. A series by Nunley in 2016 found that 10 of 11 patients were male, and all sustained the injury during sporting activity. approximately 60% were over weight or obese, other associations were diabetes and crystal arthropathy. The injury is also seen in the more elderly population often with co-morbidities.

It is important to diagnose avulsion injuries prior to surgery, as traditional end to end fixation will not be possible due to the lack of significant distal achilles tendon volume. Clinically, a defect or pain and bogginess may be located over the posterior heel, more distally than one would expect for a mid-substance rupture.

Achilles tendon avulsion is often a “sleeve” type injury where the tendon is avulsed along with a sleeve of periosteum, bone or both, the avulsion may not be complete, and often there are residual parts of the Achilles that remain attached to the calcaneum, usually medially and laterally.

The location and nature of the injury makes it a different entity from a mid-substance rupture. In common with other sleeve injuries (for example the deltoid ligament or patella tendon), the quality of healing at the bone tendon interface can be inferior; restoring optimal tension in the achilles is less predictable, and bulkiness  of scar tissue around the posterior calcaneum tends to be poorly tolerated.

In Achilles avulsion injuries, the proximal tendon is prone to retraction, surgery is aimed at restoring appropriate tension in the tendon and allowing early functional rehabilitation.

There are a number of methods of reattaching the Achilles tendon. Traditionally interosseous sutures were passed through drill holes in the calcaneum. Fixation can be limited by the volume of bone stock available, requires dissection medially and laterally, and the surgeon might be guided to their fixation points based on bony anatomy as opposed to optimal location for the tendon. Probably the most straight forward and efficient way is with the use of suture anchors, such as the Arthrex Bio-Corkscrew (slowly resorbable) anchors demonstrated in this technique. The suture anchors can be tied on top of the Achilles tendon, the sutures can be under-sewn into the tendon to avoid prominence of the suture knots. Alternatively knotless systems are available such as the Arthrex Speedbridge, which uses a broader suture tape that reduces the risk of the suture cutting out, rather than knot being tied onto the tendon. The repair is secured with two interference screws distally, which also produces a greater area of compression of the Achilles onto the posterior calcaneum