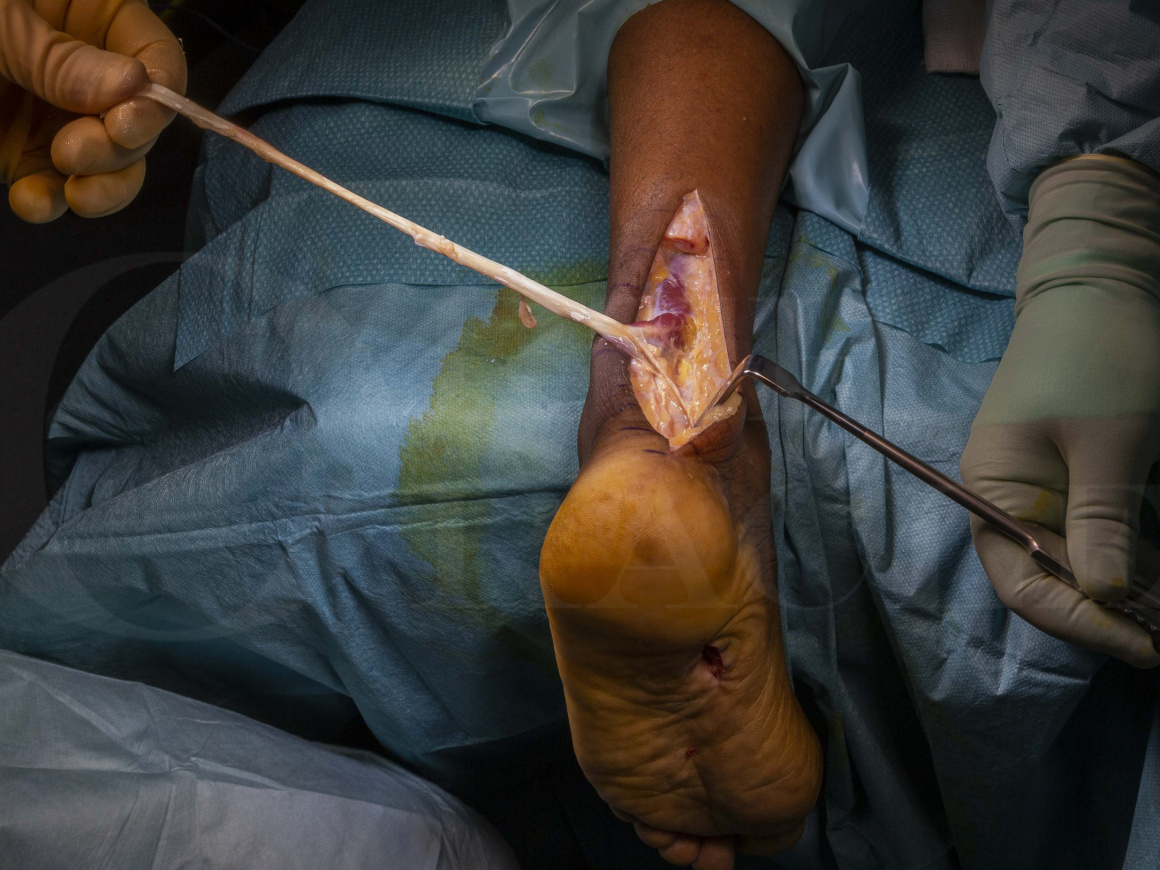 The functional loss from an incompetent Achilles is dramatic and disabling, causing biomechanical deficits during gait.  Specifically  there will be significant weakness of propulsion, with a much slower gait and no ability to run or jump.  In the long term excessive dorsiflexion at the ankle can cause anterior impingement pains and there can be exacerbation of painful pathologies in the proximal limb joints, due to an inevitable change in the direction of the upward directed Ground Reaction Force.

In a chronic rupture (where a patient either presents late or is misdiagnosed) the proximal Achilles can progressively retract leaving a large gap between the two ends.  To bridge the gap there are many surgical possibilities, which is most appropriate being partly determined by the size of the gap.

Smaller gaps can be closed using procedures on the proximal Achilles, for example fractionally lengthening musculotendinous unit proximally with a V to Y plasty or alternatively mobilising strips of tissues to “turn down”. These techniques are not suitable for bigger gaps (greater than 1-2cm), as the functional benefits drop off either due to the laxity in the myocytes and surgical trauma to the muscle belly.

The surgery is often performed with the patient in the phone or semi-prone position. The Achilles is exposed over its entire length and the FHL tendon is harvested at the posteromedial ankle and then released at the knot of Henry in the mid foot and at its distal insertion at the hallux.
Care is taken to protect the main neurovascular bundle lying just medial to the tendon at the ankle and the medial & lateral plantar nerves at the midfoot.

A long FHL transfer is a more complex procedure than a short FHL transfer. As such the risks of surgery may be slightly increased due to the bigger dissection but, in my opinion, this is outweighed by potentially greater functional improvements.  However, a short FHL transfer should be considered in cases where there is significant soft tissue compromise associated with the skin cover over the tendon, due to scarring or thinning from excessive steroid injections.

The outcomes of a long FHL transfer are good showing up to 100% power compared to the normal side, with some weakness of the hallux which in most causes no routine functional loss. These results are only achievable with a compliant patient and a well-structured rehabilitation program. It’s important to make the patient aware that it will take between one and two years to reach maximum function, though early weight-bearing function is quick.

The fact that the FHL tendon loops through a calcaneal bone tunnel and doesn’t rely on end to end tendon healing, makes the repair primarily much stronger than a primary repair, with the ability for a quicker return to unaided weight-bearing.