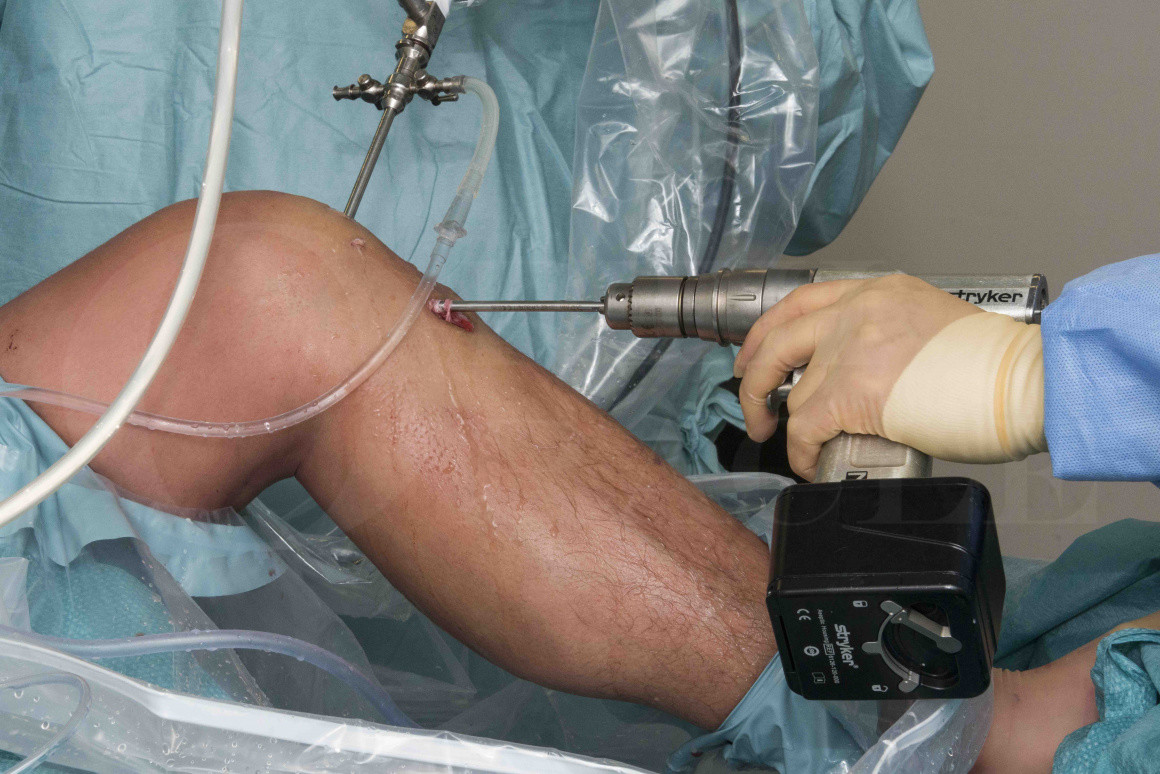 Have you ever wondered if you really need a tourniquet for ACL reconstruction surgery?

Alternatively, have you thought there may be a better way than ‘wasting’ the hamstring tails that are excised in a standard 4 strand semi-tendonosus and gracilis construct after tibial interference screw fixation?

If the answer to either of these questions is ‘yes’ then you should read on as in this technique I will describe my technique for reconstruction of a ruptured ACL with a 6 strand hamstring graft without a tourniquet. By using a 6 strand technique the cross-sectional diameter of the resultant graft is increased with a corresponding increase in absolute strength and thus load to failure limits as well. The absence of a tourniquet is a personal choice, but on systematic review and metanalysis (Kuo 2017) there are no downsides to not using a tourniquet and potentially benefits with reduced reduction in thigh girth and less bleeding post-operatively in the knee. Extrapolating from the arthroplasty world with no tourniquet there are also likely to benefits of reduced VTE risk by performing ACLR without tourniquet. There is no doubt that by increasing the strand numbers the graft diameter increases and this concept has been around since the mid 2000s (Krishna 2018 and Brown 2018).

For fixation in this case I am using the Smith & Nephew Endobutton (suspensory femoral fixation) and a Smith & Nephew metal RCI interference screw on the tibia. The RCI is a blunt threaded, 2mm cannulated metal screw which has a very long track record. The metal screws are easy to insert and remove and this is why I prefer a metal screw; the reason to remove a screw at a future date would either be for symptomatic tenderness on the anterior tibia or at revision if the graft ruptured. The endobutton is a 4mm x 12mm titanium button with 4 holes predrilled. The endobutton can be purchased separately eg for meniscal root repair, but it is usually supplied with a continuous loop of polyester around the central two holes. This allows a gentle loop through which the hamstring tendons are placed. In the two outer holes the endobutton comes pre-loaded with Ultrabraid (White) and Ethibond (Green) to provide a very strong pull and easier identification of the separate ends of the button to aid toggling on the lateral femoral wall.

The decision on whether to reconstruct an ACL rupture needs to be tailored to the patient, based on their future planned activity and their age (and thus their risk of subsequent secondary injury) or resultant instability after a trial of non-operative management. This is elegantly described in the Panther group output statement in 2020 by Diermeier; in young patients wanting to return to direction change activity then early ACLR reconstruction is advised, whereas those patients with no direction change may be treated non-operatively. If there is subjective instability after non-operative maximisation then ACLR is also indicated.