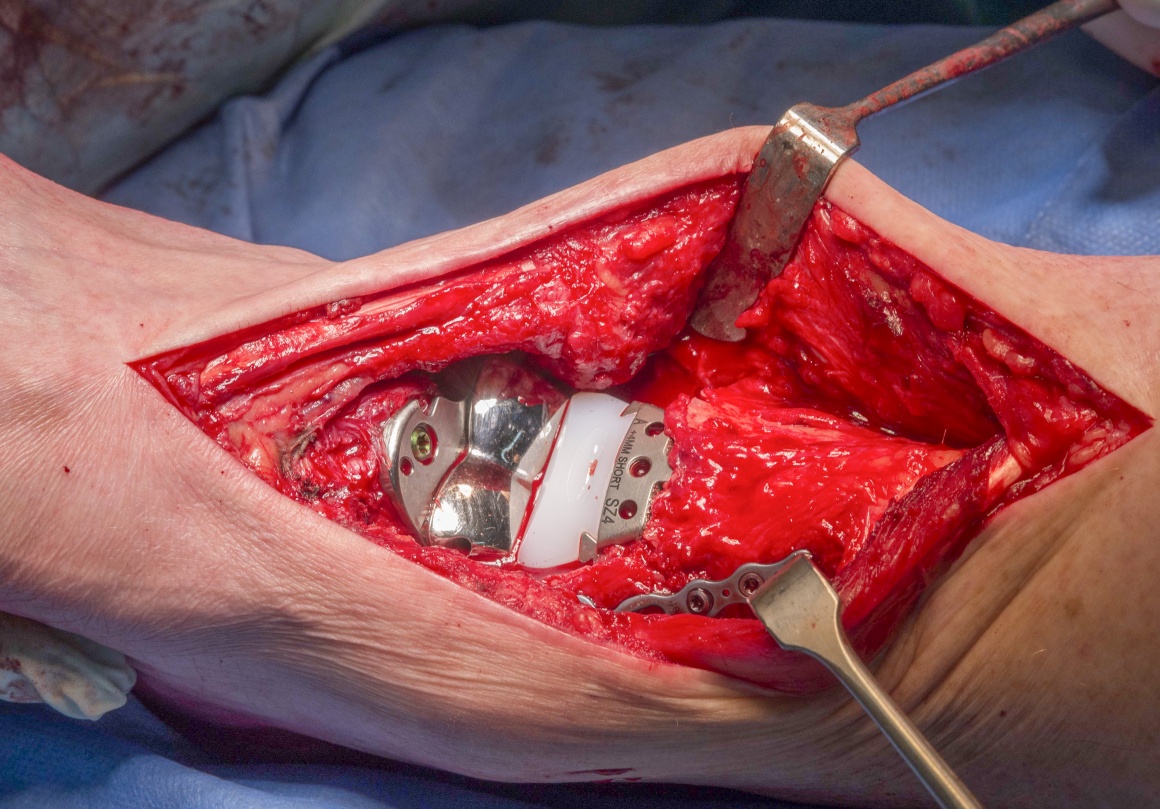 With increasing numbers of total ankle arthroplasty (TAA) operations being carried out worldwide it can be expected that we are going to encounter more frequent and probably more complex failure situations. Failure of ankle replacements occurs due to a variety of causes and some risks for early failure have been established in the literature, Gadd et al. Over time it can be considered that wear will generate a cytokine response and bone lysis, leading to implant migration and cyst formation. This mode of failure is more frequently seen in certain makes of TAA with the best know example being the now withdrawn AES system which generated massive osteolysis in some series .

The origin of cysts and loosening has been widely debated. Rodriguez et al. (2010) hypothesized that cyst formation may be related to pump action leading to synovial inclusion. However Bonnin et al. (2011) felt that some of the cysts may have evolved from pre-existing arthritic cysts. Jacobs et al. (2006) hypothesized that cyst formation may be related to overwhelming of a local afferent transport mechanism with wear particles, resulting in an accumulation of wear particles in periprosthetic tissue. Finally repeatedly authors have failed to find significant wear particles in retrieval specimens from the cysts but some (Koivu et al) have found that there is a switching on of an inflammatory cascade concluding that there is an increased expression of ‘high-mobility group box 1’ receptor for advanced glycation end product and other ‘danger signals’ which could contribute to inflammation around the implants, multilocular cyst formation, and osteolysis in failed TAA implants

The Mobility TAA (DePuy) was launched in 2003 and was  withdrawn in June 2014 . There have been no widespread publications of osteolysis though persistent medial pain is reported in some patients.

For failed TAA the commonest option is to convert the arthroplasty to an arthrodesis, which is an accepted and successful technique. Bone graft is often used from the fibula, iliac crest, allograft or using bone substitutes  to fill the resulting bone void from where the implant has been removed. If union occurs then pain relief will usually follow, but so does stiffness. If the bone loss is significant then the subtalar joint will often also be sacrificed with even greater loss of motion and functional deficit. Preservation of the subtalar joint is technically possible, usually requiring grafting of the talar defect and plate fixation of the ankle joint, if enough talar bone stock remains.

The alternative, in order to preserve motion, is to convert the failed arthroplasty to a revision joint replacement. Specific equipment has now come on to the market to facilitate this. The most tried and tested of these is the InBone system from Wright Medical Technologies, USA. There are publications that support its efficacy at early follow up (Devries, et al). The InBone is a fixed point, jig driven system using image intensification throughout in order to position the revision replacement in a reliable orientation. The system has been added to in the InVision System which also gives metallic solutions to bone loss by use of bulkier tibial trays and talar domes and with the addition of a flat plate to the talus, allowing bridging of cyst defects in the talus. The plate has augments which can be added to the plantar talar surface, though they are limited by their position.

Detailed is a complex  revision of a Mobile bearing De Puy Mobility Total Ankle Arthroplasty (which failed due to cyst formation) revised to a fixed bearing InVision Ankle replacement. The case is complicated by bony deficiency of the talus and fracture of the medial malleolus both of which are treated and discussed.