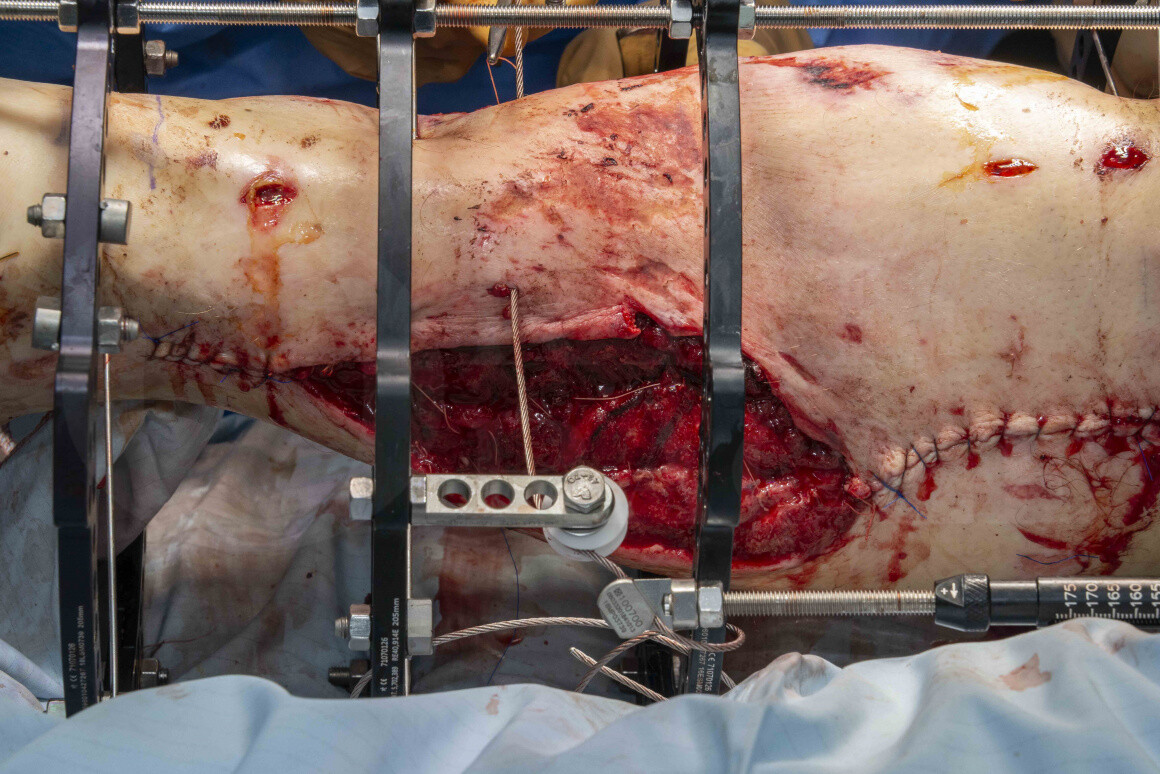 Critical bone defects occur in approximately 10% of open tibial fractures. They are more common in young males and most commonly involve the tibia. A segmental defect occurs when the entire circumference of the bone is lost. These defects can be classified by the size of the missing segment to those less than 2cm, which can often be managed with footwear modification after the fracture has been managed in a standard fashion, those between 2cm and 5cm, where a number of different options exist and massive defects over 5cm, where bone transport remains the most common treatment option.

The management of severe open fractures with bone loss can be extremely challenging.  In the majority of cases successful limb salvage can be achieved but complications such as non-union or deep infection are not uncommon and the LEAP study showed similar high rates of long term poor function following severe extremity injuries managed with either limb salvage or amputation. It is also probably the case that outcomes after amputation are better if this is used primarily, rather than as salvage after a failed limb reconstruction.

The treatment options for managing segmental bone defects in the lower limb include limb shortening for smaller defects, and the Masquelet technique (or massive bone grafting).  Vascularised bone grafts, although useful in the upper limb, tend to have problems with fracture and non-union in the lower limb and are less commonly used for massive bone defects there. More recently there has been interest in the use of printed 3D cages to produce customised implants for the management of bone defects and  early results are promising.

The gold standard for segmental defects in lower limbs remains distraction osteogenesis, as originally described by Ilizarov. Distraction osteogenesis relies upon the way maturing callus behaves under a tension-stress load. A stable mechanical environment is created, with most commonly the use of a ring fixator, following which a corticotomy is then performed, ideally in the metaphyseal segment of bone.  Following a latent phase of typically around 7 days, distraction across the corticotomy is then performed, normally at a rate of 1mm a day in incremental adjustments.

Although ring fixators reliably allow bone transport and the management of bone defects, their use can be arduous for patients, particularly due to the length of time in the fixator ( a 5cm defect takes 10 months to grow) and also soft tissue problems of the rings moving the transport segment as the wires or pins transfixing the rings of bone move through the soft tissues.

Because of these practicalities with ring fixators, the concept of cable transporters has also seen increasing usage over the past few years. This allows management of large segmental defects within a ring fixator but avoids the need for wires or pins to be dragged through the skin, by the use of a cable attached to a pulley, which gradually transports the bone segment. This has many advantages, including a far simpler method of performing the transport, which is easier for the patient to tolerate with fewer soft tissue complications and also allows the option, where desirable, to convert the ring fixator to internal fixation once the transport stage is complete and thereby reduce the patients time in a frame.

Taylor Spatial Frame(Smith and Nephew). Introduction to hardware, frame application and use of software for deformity correction.