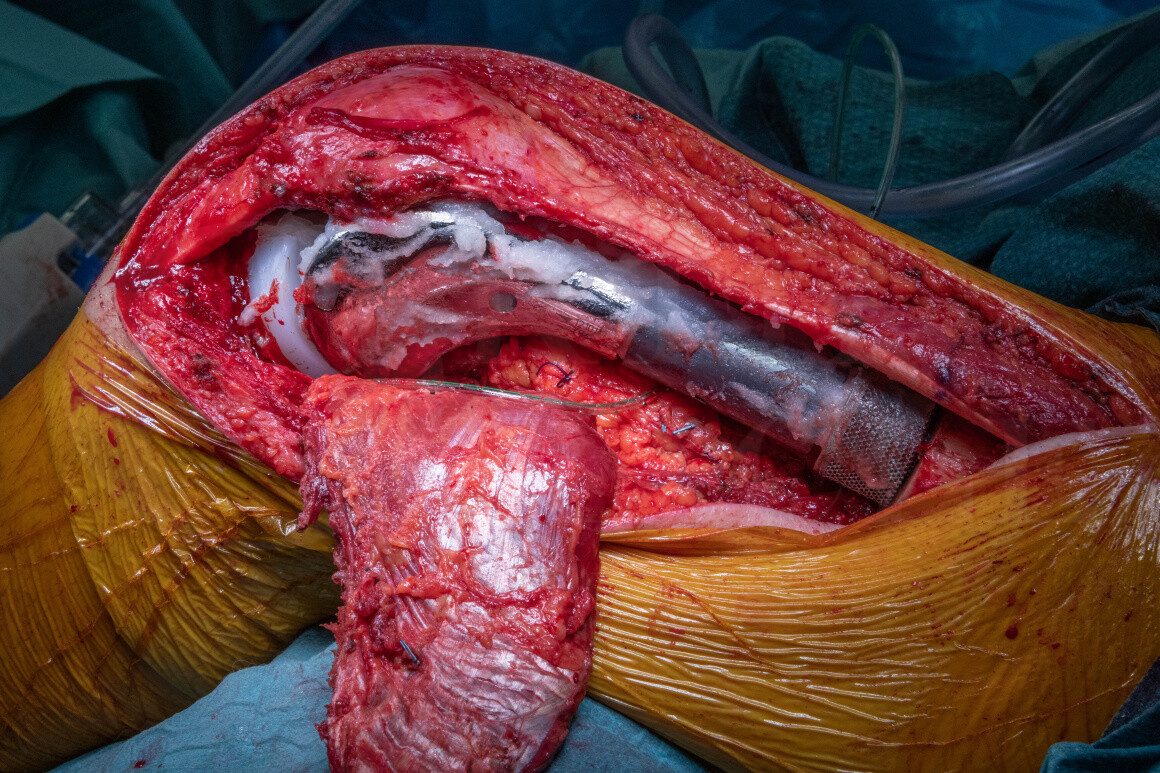 Chondrosarcoma (CS) is the second most common primary bone tumour and the most common in adults. These range from low to high grade malignant cartilage tumours which may metastasise to the lungs. They are relatively insensitive to chemo- or radiotherapy meaning that surgery is the principal intervention. Five year survival ranges from 99% for low grade to 24% for dedifferentiated chondrosarcomas. The distal femur is the most common site of primary malignant bone tumours in all age groups followed by the proximal femur, proximal humerus and pelvis. Chondrosarcomas can arise de-novo, as in this case, and also arise in other pre-existing conditions such as hereditary multiple osteochondromas (diaphysial aclasis) and multiple enchondromatosis (Ollier disease and Maffucci syndrome).

Achieving adequate surgical margins to ensure the tumour is excised-bloc is the guiding oncological principle to avoid local recurrence; local recurrence is associated with metastasis and death.

The oncological principle is to widely resect the tumour with the biopsy tract in-situ with adequate surgical margins in all planes to minimise the risk of local recurrence and reconstruct the segmental osseous defect with endoprosthesis, allograft or autograft. Endoprosthetic replacement is most commonly used when en-bloc resection involves the hip, knee or glenohumeral joint as these reconstructions offer early weight-bearing and return to adequate function with acceptable complication rates. In patients in whom limb-salvage is impossible due to tumour encroachment on nerves, blood vessels and joints, amputation may regrettably be the optimal oncological treatment for their chondrosarcoma.

In some cases the tumour extension has involved the joint cavity of the knee which would lead or compromised surgical margins if the joint capsule were exposed peri-operatively. This may be clear on pre-operative imaging or be suspected due to subtle joint effusions or extension of pathological fractures into the joint radiologically. Consequently a demanding ‘extra-articular’ excision is undertaken to excise the distal femur and proximal tibial epiphysis en-bloc without performing an arthrotomy or exposing the tumour.

The Adler Pantheon limb-salvage system has been designed to offer the latest technology combined with simplicity of use. Key features include the additive manufactured bridging collar which has an integrated endosteal sleeve with a porous structure to allow osseointegration, Agluna silver coating to help prevent early infection, a unique cement pressuriser, the ability to change rotation of the prosthesis in any direction after cementation and a self-catering rotating polyethylene bearing to aid stability.