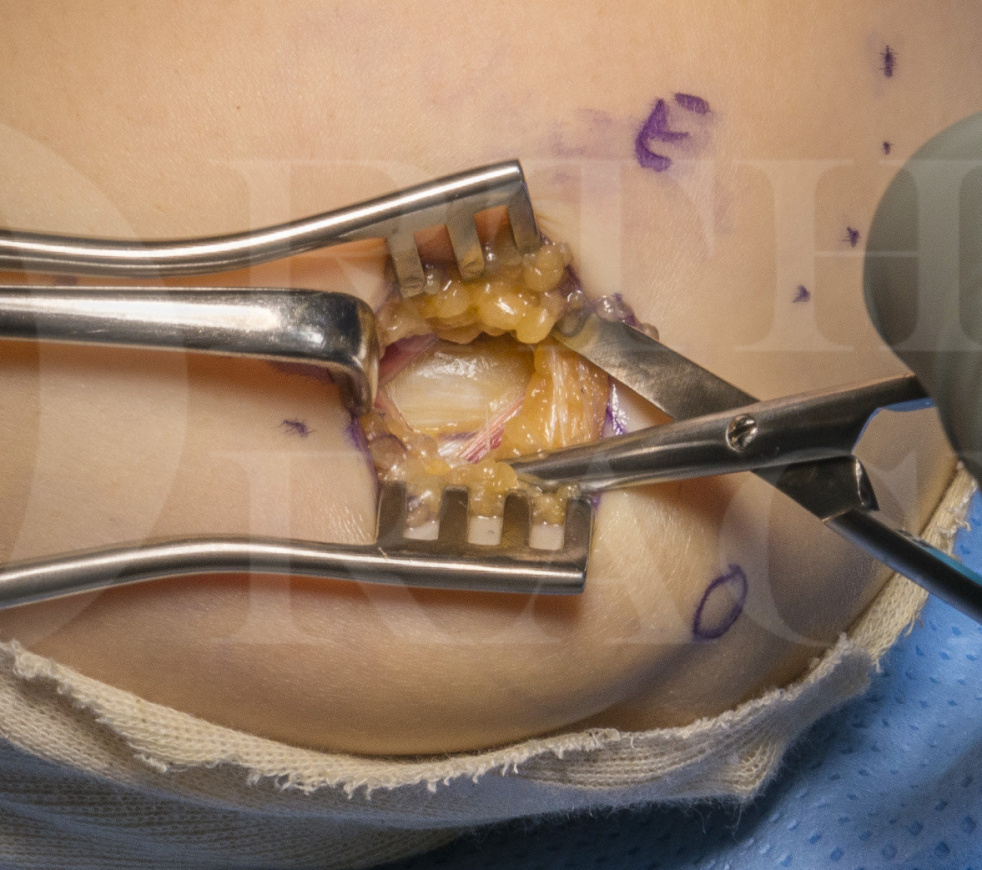 Ulnar nerve compression most commonly occurs where the nerve passes behind the medial epicondyle at the elbow, passing through the cubital tunnel and in between the two heads of the flexor carpi ulnaris muscle (FCU) to enter the forearm. The nerve becomes compressed due to a combination of it being pulled against the bone when the elbow is flexed, and being squashed from its superficial side by the fascia, ligaments and fibrous bands that form a roof above the cubital tunnel along with arcades of blood vessels. Muscles that cross over the ulnar nerve can also compress it, such as the triceps (at the arcade of Struthers), FCU, and, when present, anconeus epitrochlearis (a muscle that passes from the medial epicondyle to the olecranon, found as part of the roof of the cubital tunnel in approximately 1 in 7 people- do not confuse this with the much bigger anconeus muscle, found on the lateral aspect of the elbow).

Unless the nerve is unstable (moves across the medial epidondyle to the front of the elbow with flexion above 90 degrees), decompression of the nerve where it lies by division of the structures that lie superficial to the nerve and compromise it will usually improve intermittent symptoms and prevent deterioration of permanent nerve loss in the hand and forearm (sensory loss in the little and ring fingers, atrophy of the intrinsic muscles of the hand with impairment of thumb grips and fine motor skills).

Most surgeons are trained to identify the nerve proximal to the elbow and trace its path down into the forearm, which involves an incision that extends both above and below the elbow; particularly in patients with fat arms, identifying the nerve proximal to the cubital tunnel can be surprisingly difficult! The nerve can be found reliably where it passes between the two heads of FCU and if the nerve is identified at this site, the proximal dissection and release can be safely and easily preformed without extending the skin incision proximal to the medial epicondyle, so minimising the risk of damage to the medial cutaneous forearm nerve branches that pass close to the medial epicondyle.

Endoscopic techniques have been described for cubital tunnel release, but these require specialist equipment and offer limited practical advantages over open techniques of cubital tunnel decompression other than utilising smaller incisions. With practice, surgeons can reduce the length of skin incision used for open decompressions as they and their surgical teams become familiar with the surgical anatomy and optimal positioning of retractors.

Dominic Power has described his technique for cubital tunnel decompression on Orthoracle, the indications for which and technique are similar in many respects to the procedure described here; important differences include the positioning of the arm to make the role of the first surgical assistant easier, the site and extent of the incision to avoid potential damage to cutaneous nerves, and the technique for proximal release.

Surgeons should be aware of the uncommon but encountered potential for compression of the ulnar nerve at the wrist where the ulnar nerve passes through Guyon’s canal. Tahseen Chaudhry has described his technique for a single incision combined carpal tunnel and Guyon’s canal release on Orthoracle and readers  will also find of interest Dominic Powers revision technique: