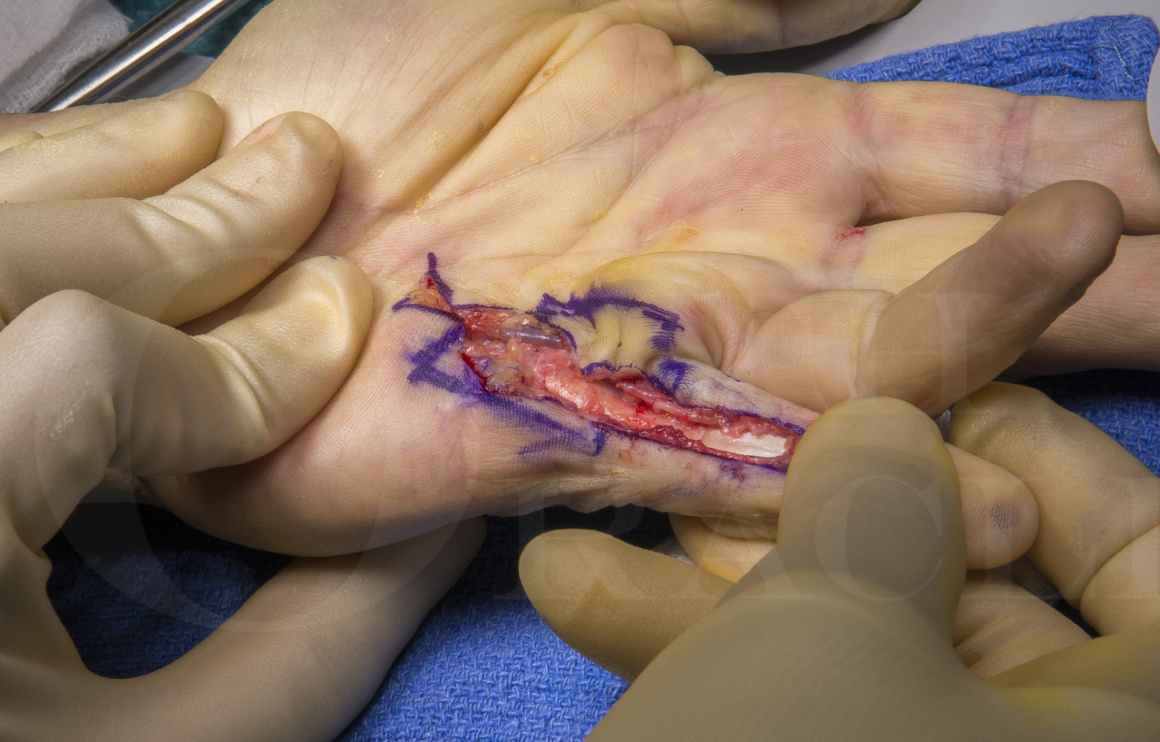 Dupuytren’s disease is a fibroproliferative condition effecting palmar tissues of the hand resulting in contractures of the fingers. It has a genetic predisposition with a variable inheritance pattern. There are several environmental factors implicated in this condition including smoking, alcoholism, diabetes, and epileptic medications. Treatment of Dupuytren’s contractures is indicated mainly for contractures effecting hand function. The treatment is chosen based on several factors including whether it is a primary disease or recurrent; the degree of contracture; patient’s co-morbidities and patient preference.

Dupuytren’s disease is an inherited autosomal dominant trait with variable penetrance and expressivity. Normal fascia is composed mainly of type I collagen. In Dupuytren’s there is an increase of type III collagen (as also seen in wound healing) and myofibroblasts which are a contractile cell derivative from the fibroblast. With this contractile potential, the normal anatomical ‘Bands’ within the hand can become contracted ‘Cords’. In addition to ‘Cords’, ‘Nodules’ are seen when a bulk of Dupuytren’s tissue appears in one site and ‘Pits’ are seen when the skin fibers contract and pull small areas of skin down towards the deeper cords in the palm.

The recognised bands/cords are as follows:

Pretendinous band/cord– a continuation of the palmaris longus and palmar fascia which is in line with each digit and inserts around the flexor sheath at the level of the MCPJ crease (a central cord can continue in this line along the flexor sheath to the DIPJ).

Lateral digital fascia/cord– longitudinal structure close to the skin running almost up the lateral midlines of the fingers attached to Grayson’s and Cleland’s ligaments.

Grapow fibre/cords– small vertical structures which tether the palmar skin to the deeper fascia and provide stability of the skin and cause pitting when contracted.

The treatment options for this condition include Needle aponeurotomy, Collagenase injection(though the drug has been currently withdrawn from the market), limited fasciectomy, segmental fasciectomy, and dermofasciectomy.

For a recurrent disease where there is the involvement of the skin, a Dermofasciectomy is recommended as it has the lowest recurrence rate. This procedure involves excising the segment of skin involved in Dupuytren’s disease and replacing it with a full-thickness skin graft from the forearm. This however carries a risk of graft loss in which case the wound has to be allowed to heal by secondary intention.

With long-standing contractures of the PIP joint, the central slip may get attenuated resulting in a Boutnonnierre deformity. This is clinically seen as a flexed PIP joint and a hyperextended DIP joint. In these cases after the contractures are released with or without a joint release, full passive straightening is achieved but a tenodesis test(flexing the patient’s wrist extends the fingers suggesting the integrity of the tendon) will be negative. In these cases there may be a consideration for a central slip tightening procedure. This can be done by reattaching the attenuated central slip using a bone anchor or by doing a ‘Chamay’ incision and advancing the tendon proximally as can be seen in this case.

This case illustrates a recurrent Dupuytren’s disease affecting the left little finger in a middle-aged man. The primary procedure was a limited fasciectomy carried out 10years ago. There is noted recurrent disease and progression of the disease into the finger causing an MCP joint contracture of 30 degrees and a PIP joint contracture of 80 degrees. There is hyperextension of the DIP joint suggesting an attenuation of the central slip. The palmar skin is scarred and indurated suggesting its involvement by the disease. After a detailed discussion, a decision has been made to perform a dermofasciectomy with full-thickness skin grafting. The adjunctive procedures planned are PIP joint release and a central slip tightening.

Readers will also find the following OrthOracle techniques of interest:

Palmar and digital fasciectomy for Dupuytrens