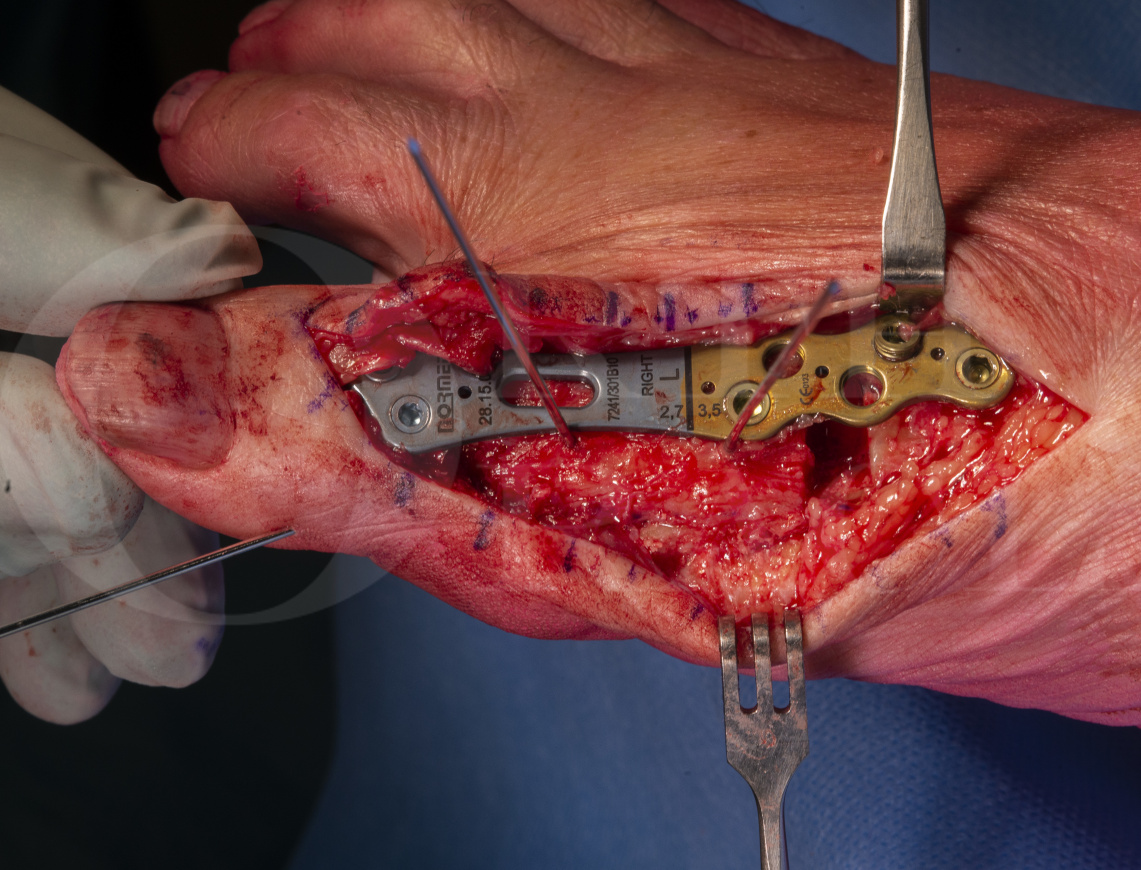 The technique described is a lengthening osteotomy of the first metatarsal combined with an intercurrent metatarsophalangeal joint fusion. It is indicated for cases in which the 1st metatarsophalangeal joint (MTPJ) has been excised. This is most commonly carried out with a Kellers resection arthroplasty but may also result from a failed 1st MTP joint replacement in which there is resulting bone loss.

Keller was an American surgeon who popularised an excision arthroplasty of the 1st Metatarsophalangeal joint (MTPJ) for hallux valgus in his report 1904. The operation was originally described by Davis-Colley in 1887. The operation was widely carried out in the first half of the 20th century and further modifications which involved a greater resection of the proximal phalanx (Bonney and Macnab 1952) and stabilisation of the pseudojoint with a K-wire (Fitzgerald 1950) further promoted its use.

However over the later part of the last century more modern techniques surpassed the Keller excision arthroplasty with more predictable results and avoidance of the complications of a short great toe, the dorsiflexion deformity which was common (cock up deformity) and transfer metatarsalgia some years after the procedure; all of which became widely reported.

Kellers procedure became historic and was reserved mostly for use in the elderly and low demand individual. The author infact has never carried out a Kellers procedure for hallux valgus because of the unacceptable longer term results.

This case is a 70 year woman presenting with a long history of recurrent deformity, painful pseudoarthrosis and most recently transfer metatarsalgia. She had had little respite with the use of orthotics or shoe modifications

The options open to her operatively were discussed but we decided to try to preserve the length of the great toe and provide a stable arthrodesis without the additional need for bone graft or bone substitute.

Dr Marcus Preis from Wiesbaden in Germany has popularised the DocPrice technique to restore length to a first ray at the time of fusion after Kellers resection arthroplasty. He has personal experience of more than 100 cases (author’s personal correspondence). The dorsal half of the metatarsal is transported distally on the lateral soft tissue mass in which the blood supply is held. This creates a stable bridge and obviates the need for autograft. The gaps which remain on the proximal dorsal metatarsal and the joint fusion site on the plantar side do not require grafting but fill in over time.

The DocPrice plate has specific features to allow for a stable fusion in that it has strong 3.5mm locking screws proximally and 2.7mm locking screws distally. Because the shaft of the 1st Metatarsal remains intact on the plantar side there does not need to be extensive fixation proximally, though the gap which results dorsally from the graft translation does need to be bridged. There are no other devices available which are specific to this operation and though other rigid locking plates could be used my concern would be residual hardware prominence distally.

The technique is described in the German textbook Vorfusschirurgie, Springer Verlag 2012, edited by Sabo and Diserderius.

Readers may also find the following OrthOracle techniques of interest: