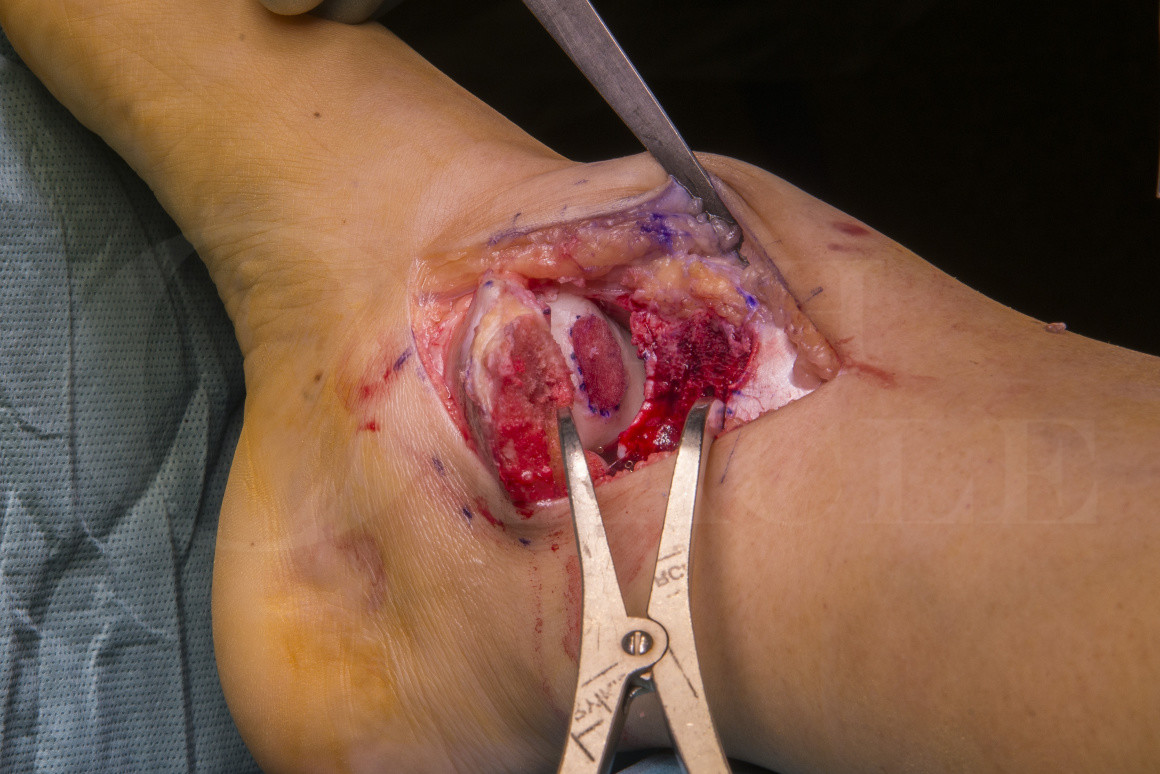 The ankle is the third most common joint(after the knee and elbow) to be effected by osteochondritis dissecans , its incidence being approximately 0.09%, and most commonly presenting during the second decade of life.  Several studies have shown that the majority of such lesions are located in the centro-medial and centro-lateral zones. Medial lesions tended to be deeper and are associated with subchondral changes. The deeper, sometimes cystic nature of the medial talar lesions could be interpreted as lending support the theory that a pathophysiology other than trauma may contribute to the development of these lesions.

The limited capacity of talar osteochondral lesions to heal is multifactorial. 60% of the talus is covered by cartilage, which itself has poor intrinsic regenerative capacity due to its avascularity. Cartilage relies on nutrition from synovial fluid and from the subchondral bone. The talus also has a poor blood supply which leads to a further diminished ability for talar cartilage to heal after injury. The blood supply to the talus comes from a complex anastomotic network between the peroneal, posterior tibial, and anterior tibial arterial angiosomes. This complex network from multiple vessels results in certain “watershed areas”, with poor blood supply that sit on the margins of such areas, where this limited overlap in the vessels.

A cadeveric study by Lomax et al 2014, showed relatively poor perfusion in the posteromedial, posterolateral, and mid-medial sections of subchondral bone. Shepherd et al |(1999) found a thickness of 0.7 to 1.2 mm in the ankle compared to 1.5 to 2.6 mm in the knee, which may reduce the ability of the local cartilage to resist shear and impact loads.

Arthroscopic cartilage repair strategies include bone marrow stimulation by intra-articular drilling, known as microfracture, and also retrograde drilling. Bone marrow stimulation is often used as the first line of treatment after failure of nonoperative measures. The cells and growth factors arising from the bone marrow  stimulate repair, leading to the formation of fibrocartilage within the defect. Fibrocartilage is composed primarily of type I collagen rather than the type II collagen which is predominant in the hyaline cartilage that lines synovial joints. Though Type I collagen is biomechanically and structurally inferior to natural hyaline cartilage the technique produces reliable clinical improvement with reduction of pain and increase in function in 65% to 90% of cases.

There are a variety of relevant prognostic indicators associated with bone marrow stimulation, including patient age, lesion chronicity, size, location and containment, and presence of subchondral cysts or associated joint degeneration. OLT size shows an inverse relationship with outcome after microfracture. Chuckpaiwong et al reviewed 105 arthroscopically treated osteochondral lesions of the ankle and lesion size was strongly correlated with successful outcome. No treatment failures were reported when lesions had an average diameter less than 15 mm, whilst only 3% of patients had a successful outcome with a lesion 15 mm or larger. A further study by Choi et al reported similar findings, with lesions under 15 mm2 based on MRI imaging achieving successful clinical outcomes, and poor results in the over 15mm.

Microfracture therefore remains the gold standard for lesions measuring less than 15mm2.  though even when of this size talar shoulder lesions, cystic lesions and those with associated degenerative changes on tibial and talar surfaces are associated with poorer outcomes.

The limitations of arthroscopic bone marrow stimulation techniques in treating larger lesions, and as revision for failed treatment has lead to the adoption of other surgical techniques.

ACI and MACI are 2-stage procedures in which hyaline cartilage is harvested from the anterior talus or the non loading portion of the knee as a the first stage. The cartilage is cultured to expand the chondrocytes population, before the chondrocytes are re-implanted into the osteochondral lesion and kept in  place either by sewing a periosteal patch over the defect or using a collagen matrix. The aim being to regenerate new hyaline cartilage that can incorporate and fill the chondral lesion.

Unlike the ACI(autologous chondrocyte implantation) and MACI(matrix-induced autologous chondrocyte implantation) procedures, which require cartilage harvest during the first procedure and then a second procedure to implant the cells, the HAMIC procedure is a one stage technique. Giannini et al compared 56 patients receiving ACI to 25 patients treated with 1-step AMIC. Their group found no difference in the improvement in outcome scores and reported similar findings on MRI and second-look arthroscopy. Autologous Matrix Induced Chondrogenesis (AMIC) is a technique that utilises a porcine collagen membrane in association with bone marrow stimulation techniques to treat osteochondral lesions.

The HAMIC is a technique that uses polyglycolic acid (PGA) and hyaluronin scaffold(Chondrotissue®️) to treat osteochondral lesions. This scaffold is actually a membrane which is impregnated with freeze dried high concentration hyaluronic acid. The membrane provides immediate coverage of the osteochondral defect as well as mechanical stability over the surface of the lesion. It is porous and acts as a substrate for stem cells and growth factors produced from bone marrow stimulation to grow into and onto. The addition of  hyaluronic acid stimulates chondrogenesis from stem cells and results in type II collagen. The membrane is fully absorbed within 4 months.