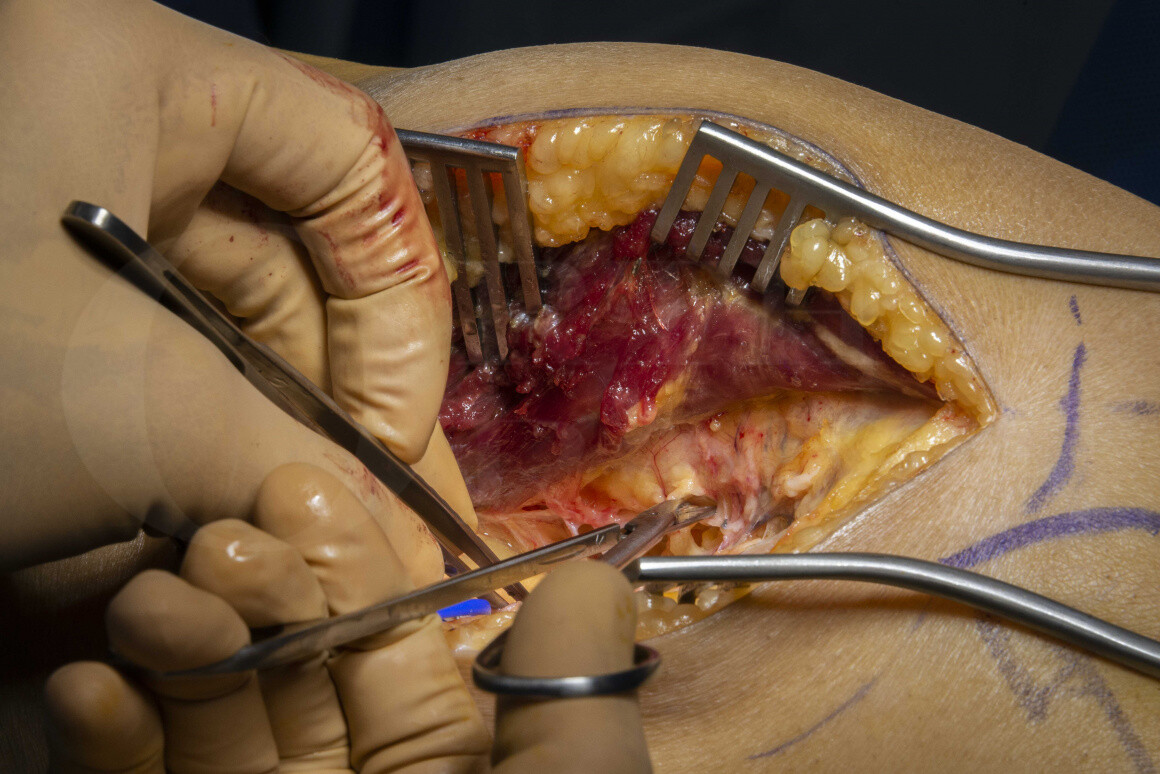 Vascularised bone grafts have been used in the treatment of skeletal defects and persistent atrophic non-unions for many years, particularly when these are associated with inadequate vascularity.

In 1988, Masquelet, described a periosteal flap from the medial femoral condyle, based on the descending geniculate artery. In 1991, Doi described a useful modification of this flap to include cortex and periosteum. The technique was initially predominantly used in the management of scaphoid non-unions. It has since gained widespread acceptance in treating difficult non-unions, particularly those involving poorly vascularised bone or avascular necrosis. In my practice, the technique has been successfully used to manage scaphoid non-unions with poor prognostic factors (see references).
I have also used it for individual difficult cases of non-union in other anatomical areas, including the clavicle and the humeral shaft.

The medial femoral condyle bone flap can be modified to include a large section of periosteal tissue, which can be used to wrap around the defect with varying amounts of cortical and cancellous bone included.

Some authors have included a skin paddle, based on a saphenous artery perforator. This can be used as both as a monitor flap and provides soft tissue cover where required. Further modifications have allowed surgeons to include a section of cartilage from a non-articulating part of the trochlea, to reconstruct defects where the articular cartilage is involved.

The descending genicular artery is absent in about 10-15% of cases and the surgeon must therefore be prepared to use the alternative potentially shorter pedicle.

The bone flap is located over the medial femoral condyle just proximal to the subchondral bone of the anterior-distal articular surfaces. Anteriorly it is bordered by the medial patellar facet. The distal border is limited by the medial collateral ligament. The dense condensation of bone in the posterior femur forms the posterior border and must be protected carefully in view of its significant role in the strength of the distal femur in axial load bearing.

When non-union sites require significant lengths of bone (in my practice anything above 6cm), I would opt for a longer vascularised bone such as the fibula. For smaller defects such as the scaphoid or a short defect within the humerus, we have found the medial femoral condyle to be an excellent source of vascularised bone with minimal donor site morbidity, minimal flap harvest time and adequate pedicle length for most scenarios.

In this case, a persistent humeral non-union that had failed 3 previous attempts at non-union surgery was referred for microvascular input and the procedure was performed by the hand and micro team in association with the patient’s orthopaedic surgeon.