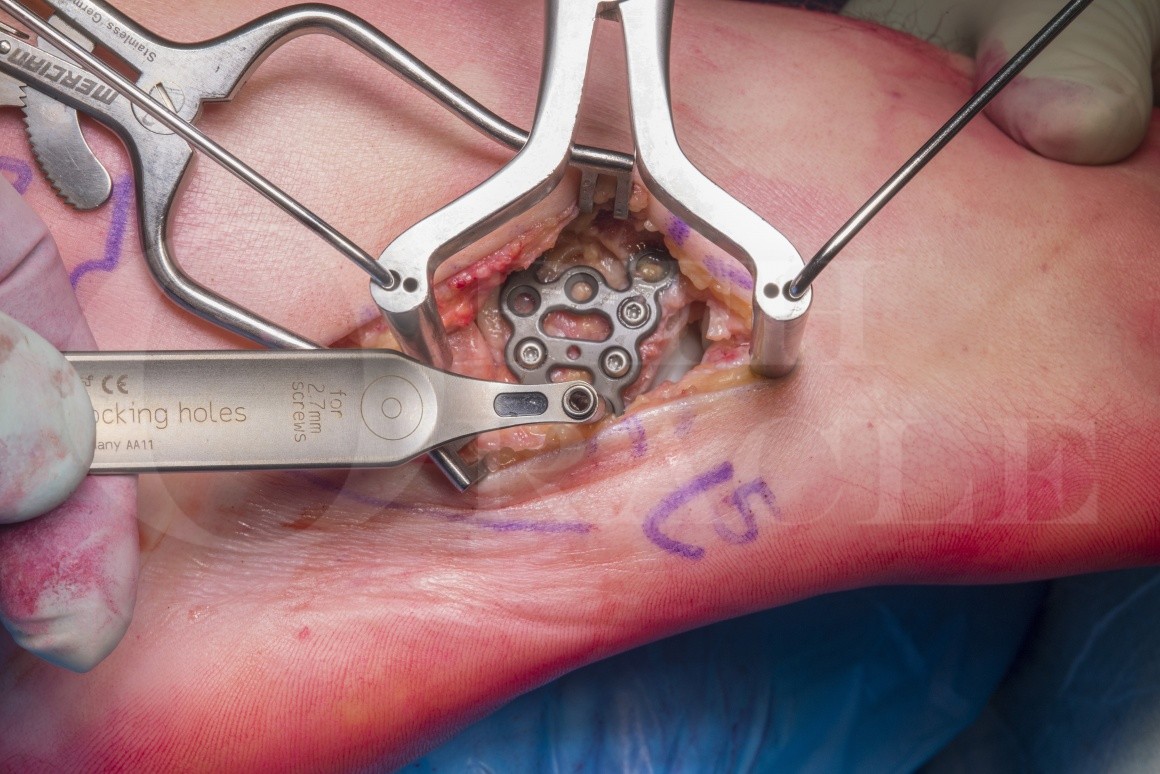 The cuboid bone is the keystone of the lateral longitudinal arch of the foot.  Together with the calcaneus and the lateral two rays of the foot (the 4th and 5th metatarsals and corresponding phalanges) it makes up the central bone in the lateral column of the foot. The medial column then is composed of the talus, navicular, cuneiforms and the medial three rays of the foot.  Owing to its intimate relationships with its surrounding architecture, the cuboid is rarely injured in isolation, especially in higher energy injuries where navicular fractures are often also associated and my colleague in Sheffield, Mr Mark Davies has described these in the Navicular Fracture Orthoracle Operation.

The, calcaneo-cuboid joint together with the talonavicular joint, forms the transverse tarsal joint, crucial for effective gait – absorbing energy in heel strike and stiffening to aid in propulsion.  The combination of these two joints is commonly referred to the Chopart joint.

The term Nutcracker Fracture was coined by Hermel and Gershon-Cohen in the Radiology journal in 1953. It was because of the compressive forces that exist towards the cuboid in forced abduction that they felt the bone burst as if it were in a Nutcracker

Acute, traumatic fractures of the cuboid bone are relatively uncommon with an incidence of 1.8/100,000/year and are frequently associated with other midfoot fractures (Classification and epidemiology of mid-foot fractures AUCourt-Brown CM, Zinna S, Ekrol I; The Foot. 2006;16:138).  The severity of the cuboid fracture lie on a spectrum dependent upon the amount and nature of the energy imparted across the bone.  Injuries range from simple ligamentous avulsions associated with ankle sprains through to crush injuries not only involving the cuboid but also the navicular and have been comprehensively classified into five groups in a recent paper from the Sheffield Foot and Ankle Unit. These latter, high-energy injuries have been shown to correlate with significant long-term morbidity and adverse function especially in the multiply injured patient. Failure to restore the anatomic relationships of the bony components within both columns, together with their relative column length, can result in significant morbidity. Like navicular fractures, those of the cuboid bone can be subtle and diagnosis is frequently delayed, either through inadequate imaging or the presence of other significant, distracting injuries in the multiply injured patient.

This case is a 27 year old male who was the driver of his car involved in a front end collision. He sustained an isolated injury to his right foot which was initially missed in the Emergency Department who felt that his foot radiographs were normal. The injury was thankfully recognised in the fracture clinic where the abnormal contour of the articulation between the cuboid and the 4th and 5th metatarsals was spotted. From that fracture clinic he subsequently underwent a CT scan defining the injury as seen above. In light of the displacement at the joint surgery was recommended and he underwent the procedure described here one week post injury.