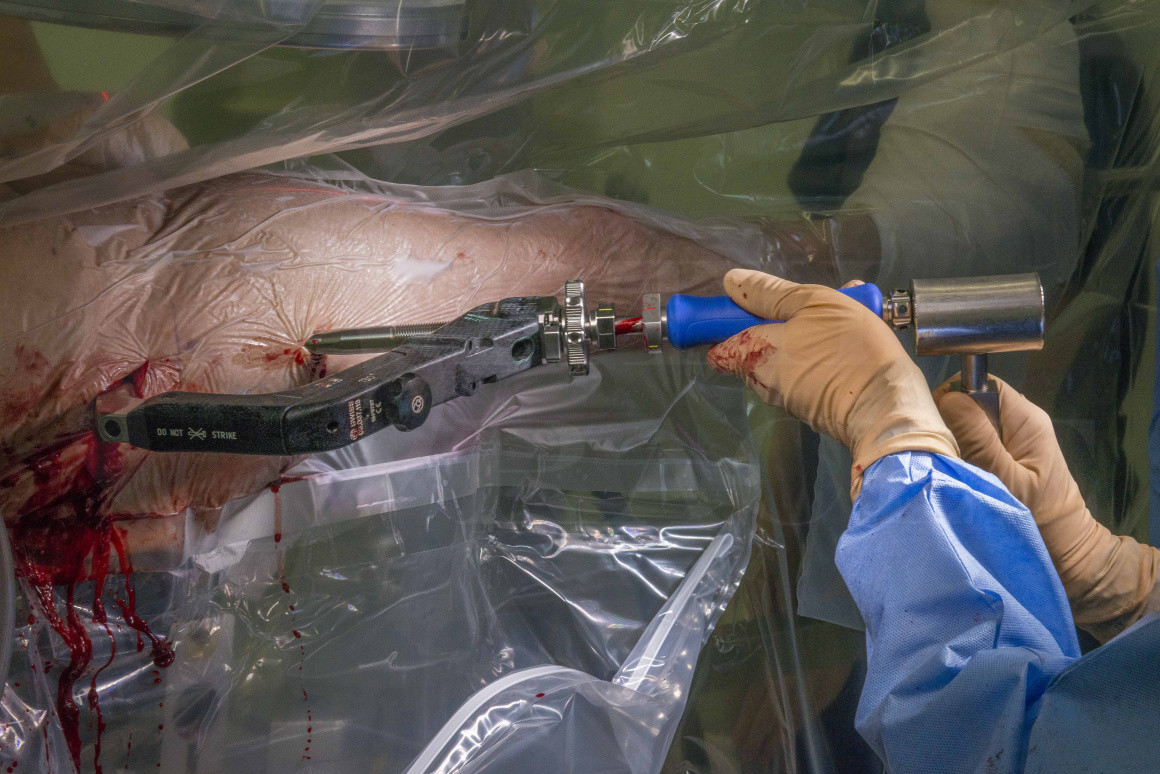 Intertrochanteric hip fractures are more commonly treated with a Dynamic Hip Screw (DHS) in the UK. However, there is good reason to consider a nail in certain situations, in particular if there is any lateral wall or greater trochanter compromise. This is because the DHS is designed to allow the fracture to collapse and in the absence of a lateral wall to buttress this collapse, the femoral diaphysis can medialise and the hip abductors lose their mechanical advantage. If recognised, this situation can be prevented by augmenting the DHS with a Trochanteric Stabilisation Plate (TSP). However this often irritates the lateral soft tissues and can cause a trochanteric bursitis.

The National Institute for Health and Care Excellence (NICE), an advisory body in the UK, states that adults with trochanteric fractures above and including the lesser trochanter should be treated with extramedullary implants. Evidence to support their position is that similar clinical outcomes can be achieved with both types of device and there is some evidence for a higher re-operation rate due to periprosthetic fracture with a nail, which is also a more expensive implant than a DHS. Looking outside of the UK, then these fracture patterns are routinely treated with intramedullary devices.

Intramedullary implants have been reported to be associated with a higher 30 day mortality when compared with sliding hip screws and Whitehouse et al. suggest that for every 112 femoral nails there will be 1 excess death. However, they do not know whether the implant / technique is causative or whether there were significant differences between the cohorts, as this was not a randomised controlled trial. It is therefore important to ensure that these devices are used selectively.

The TFNA is available as either a short nail (lengths 170mm, 200mm, 235mm) or a long nail (lengths 300-480mm) and can be used with either a screw or helical blade. The proximal end of the nail is 15.66mm and distally the nails are available in 9mm, 10mm, 11mm, 12mm and 14mm diameters. It has a radius of curvature (ROC) of 1.0 metres which is different to its’ predecessor the PFNA which had a ROC of 1.5 metres. Internally there is a pre-assembled locking mechanism to control the blade rotation and either lock it statically or dynamically. The blade angles are available in 125 degrees, 130 degrees and 135 degrees and all nails have an anatomic 10 degrees of anteversion. The nails are made from titanium and accept 5mm locking bolts distally. In comparison with a competitor nail such as the Stryker Gamma3 nail which has a ROC of 1.5 metres, the TFNA is more likely to have an anatomical fit with the normal anterior bow of the femur and reduces the risk of anterior impingement of the nail in the distal femur which can potentially perforate or cause distal femoral fractures.

Implant failure is a rare event but Synthes has recognised that when these nails do fail, they commonly tend to fail at the screw / blade hole. This can mean that subsequent extraction is difficult. To overcome this there is a thread internally in the nail (below the blade hole) where an instrument can be attached and the nail removed more easily.

The TFNA can be augmented with low viscosity bone cement that can be injected through the cannulated screw or helical blade into the femoral head for patients with severe osteoporosis. To do this, the insertion handle is removed and the 3.2mm guide wire is removed from the screw or blade. The cement is then injected through the cannulation where the wire previously was and exits through perforations in the tip of the screw / blade. Bone cement (polymethylmethacrylate – PMMA) is however contraindicated in the following circumstances: