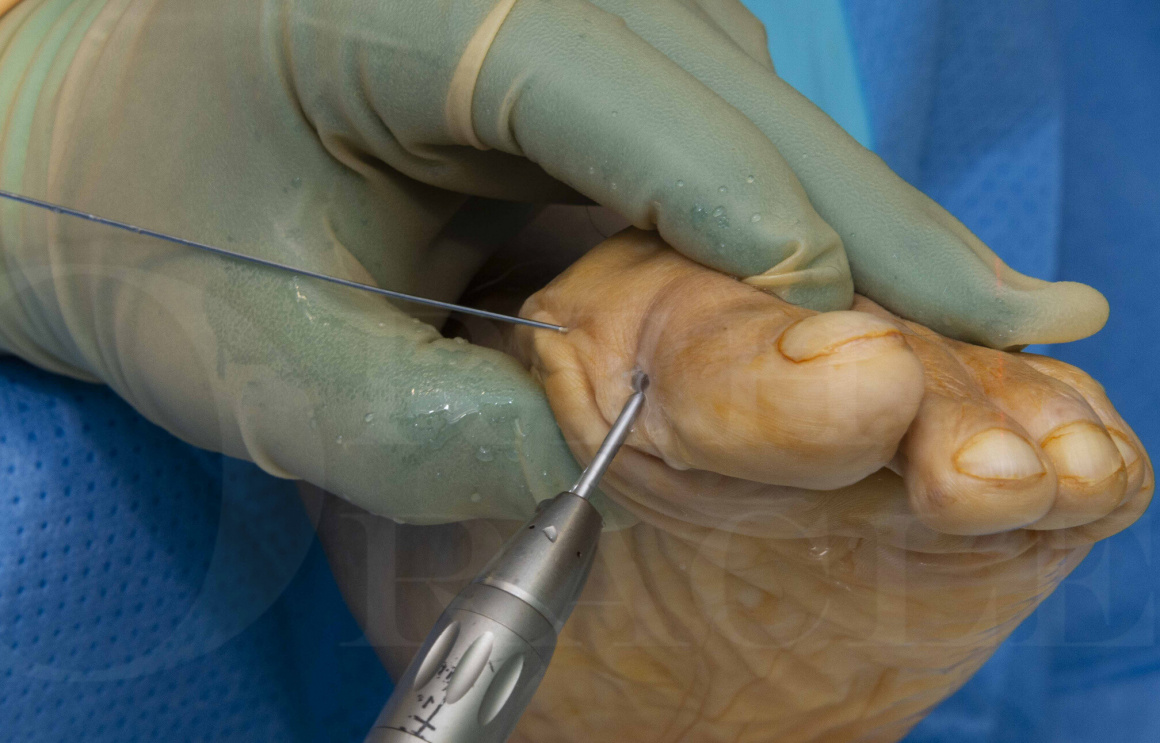 Correction of the intermetatarsal angle has been the foundation of the surgical treatment of Hallux Valgus in the adult, which ensures adequate correction of the vast majority of hallux valgus deformity. However in some, despite addressing this the deformity persists, due most commonly to deformity  at the interphalangeal joint or a congenital curvature of the distal phalanx, the so called valgus interphalangeus. These are often quite subtle and in a majority of patients will not cause significant difficulties. However in a small percentage of patients the slight deformity in valgus of the hallux can cause difficulties with impingement at the second toe interface. It may even override the second toe slightly so as to cause attrition or irritation in footwear. Occasionally it can push the second toe into a degree of plantar flexion at the interphalangeal joints, thereby causing a secondary deformity, which can then cause problems with footwear. This is sometimes seen in patients who have had primary hallux valgus correction in conjunction with lesser toe corrections.

The aim of the procedure in these cases is to correct the valgus interphalangeus, by resecting a medial closing wedge to varise the toe, so as to remove the impingement on the second toe. This is not a substitute for adequate correction of the primary deformity and correcting the secondary Hallux interphalangeus will not prevent deformity recurrence if the intermetatarsal . Therefore the quality of primary correction has to be carefully analysed, and any remedial measures need to be taken, to ensure that this is fully corrected before embarking on an Akin osteotomy.

The Akin osteotomy was first described by O.F Akin in 1925, and was largely forgotten until 1967 when Collof and Weitz published a paper in the JBJS, re-confirming the use of the osteotomy to correct mild to moderate deformity, without disturbing the congruity of the MTP joint. Since that time it has been widely used to correct residual deformity, often in conjunction with primary surgery to correct the intermetatarsal angle.

The original techniques were open, and consisted of exposing the metaphyseal aspect of the proximal phalanx, excising a medially based  wedge, and fixing the osteotomy with screws, staples or cerclage wires.

More recently a number of surgeons including Mariano de Prado(Spain), David Redfern(UK) and Joel Vernois(France) amongst others, have popularised a reproducible minimally invasive technique for this procedure, which has become very popular.  In the hands of surgeons who also perform the metatarsal osteotomy percutaneously, the Akin is now routinely performed percutaneously.

The procedure involves the use of a minimally invasive burr, the most popular of which is the Shannon burr (a generic term to describe a straight cutting burr) which is 2mm in diameter with a cutting length of 12 mm. These measurements are specific to the use of the burr used in an Akin osteotomy. It is extremely important that this  has to be used in conjunction with a high torque/low speed  driver system, with the facility to irrigate the bur to cool it and avoid thermal injury to bone.

It is also most important that this technique, as with all other MIS surgery, should be performed only by Surgeons with  the necessary training and skills to execute it in a safe and reproducible fashion.

The use of the burr allows one to do this procedure with only a 3 mm incision and minimal stripping of the periosteum to create working space to perform the osteotomy. It stands to reason that the burr will take out 3 mm of bone by way of  kerf (the width of a material that’s taken out by a cutting process) as the burr is 2 mm in diameter. However by keeping the lateral cortex of the phalanx intact, the impact of any potential shortening is minimised to a great extent. Furthermore the arc travelled by the tip of the toe when the medial wedges is excised and the osteotomy is closed, hinging on the intact lateral cortex, also addresses the the length issue by distalising the tip of the toe when placed in the corrected position.

The  essential tenets of the minimally invasive Akin technique are: