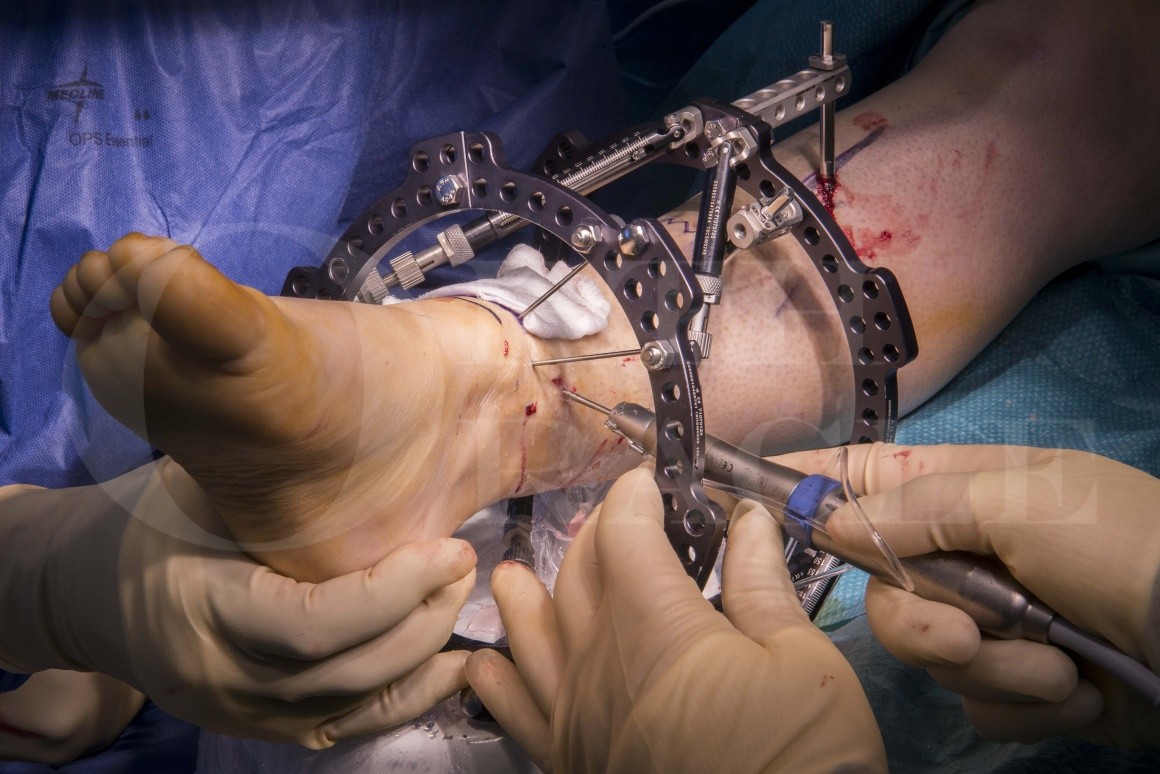 The adoption of technology and innovative techniques in orthopaedic surgery reflects an evolution seen in surgery more generally. The driver of surgical innovation is a quest to decrease complication rates and improve patients outcomes whilst secondarily improving the cost-effectiveness of interventions. One clear example of a true “sea-change” in Orthopaedic treatment has been the development of distraction osteogenesis with the Ilizarov frame and its’ successor the Taylor spatial frame.

Minimally invasive surgery (MIS) of the foot and ankle was popularised with arthroscopic techniques for joint related pathology but has now progressed to other techniques, traditionally performed in an open fashion, such as osteotomies to correct deformity.

The Taylor Spatial frame is a hexapod system that was devised initially for the treatment of complex fractures and limb lengthening and is based on the philosophy of distraction osteogenesis and a novel stabilisation technique for fractures. This was conceived and popularised by the Russian Gavriil Abramovich Ilizarov, practicing in the Kurgan region of Russia, who treated limb length discrepancy and non unions of tibial fractures with his frame and gained world attention in the 50s and 60s.  The management of difficult fracture non-unions, especially of the tibia, was transformed with the use of his frame and also distraction osteogenesis.

Ilizarov found that by distracting  immature callus he could initiate, and even accelerate, bone growth whilst keeping the patient ambulant and weight bearing. The use of struts in a hexapod formation to effect changes in the position of a point through 3 dimensional space is not new in its philosophy. It was first described as a mathematical principle by Chasles, a 19th century mathematician who was the father of conic theory. Chasles demonstrated mathematically that it was possible to move an object in all 3 dimensions spatially by the use of 6 types of transitions simultaneously. This theory was successfully incorporated into simulators in various industries, such as aviation. Ilizarovs’ frame was a functioning model of the same mathematical principle and was able to distract rotate angulate and translate bone in all dimensions. His frame required real motors and hinges where the adjustments had to be made manually with complex mathematical calculations that were required to correct deformity in particular.

Charlie Taylor with his team then produced the same frame with adjustable telescoping struts called the Taylor Spatial Frame (TSF) and used computing power to calculate how the lengthening and shortening of these struts could influence deformity correction in the same manner as Ilizarov’s frame. Their frame did not need hinges as these were now rendered virtual by the strut arrangement. A computer provided the prescription by which these were to be shortened or lengthened to correct the deformity of long bones and joints. In the latter case the selective stretching of contracted tissue around the joint was made easier and far less traumatic than open release by doing it gradually so that nerve and artery were not stretched to the point of failure. It is  also used in infections of bone as distraction also distorts and makes hostile the milieu in which pathogens flourished, possibly by mechanically distorting their environments.

Minimally invasive surgery has been attempted sporadically for many decades but now has gained popularity by the advent of predictable and safe cutting instrumentation. The use of burrs rather than saws to make bone cuts meant that rotary cutting power could be used rather than oscillation. As a result the entry portal for the cutting instrument could be reduced to a few millimetres as cutting with rotation means only a small arc of travel of the instrument is required. The use of high torque and low speed burrs also meant that bone could now be osteotomized effectively without significant increases in temperature, therefore preventing the complication of thermal bionecrosis seen with the high speed cutting of bone by power saws. The use of irrigated instruments further decreases this complication. Such minimally invasive methods are particularly useful in difficult biological situations such as poor skin quality, multiple and severe scarring as also extensive skin grafted areas, patients with dubious peripheral circulation, diabetics and other patients who have an increased risk of infection.

The patient is a female in her early 40s and suffered a distal tibial fracture which was treated several years ago with internal fixation. She suffered an infection and subsequently required to have the broken metalwork removed from the tibia. The fibula was stabilised with an osteotomy to try and correct the deformity whilst there was still a tibial nonunion present. However this did not correct the tibial deformity which persisted. She went on to heal after about a year, but suffered a significant malunion of her distal tibia in varus and recurvatum. She was also a heavy smoker and this precluded her surgeons from attempting to correct her deformity by open methods and conventional internal fixation and therefore she persevered with her deformity. However she started to suffer significant ankle pain and the emergence of symptomatic ankle arthritis. The likelihood of fusion was increasing but given the severity of her deformity it was difficult to consider an ankle arthrodoesis without shortening and acute correction of deformity through the fusion . This made the procedure technically demanding and the outcome unpredictable in its biomechanical sequlae. My decision was therefore to use MIS techniques for osteotomy and the Taylor spatial frame for deformity correction prior to any fusion.

The patient was counselled on the need to stop smoking and avoid the use of all nicotine products to give the operation the best chance of success. She was also advised about the significant risks involved in the procedure and was given the opportunity to discuss the procedure with other patients who had had TSF correction of deformity. This is a very important process as the TSF once applied cannot be removed before the completion of treatment which can take up to 6 months or longer in some cases. This can have a very significant psychological impact on patients. It is therefore essential to identify patients who are not psychologically suitable for the TSF. The wrong choice of patients can have a devastating outcome for both patient and surgeon especially if treatment has to be aborted prematurely.

Minimally invasive surgery and external fixation has become the primary method of treatment for osteotomy and deformity correction in my practice. I use limited open techniques only when necessary. The safety and biological advantages of the minimally invasive osteotomy, the flexibility, reliability and robustness of the TSF along with its ease of correction of multiaxial deformity through computer aided prescription has certainly aided this process.

Readers will also find of interest the open technique of performing a distal tibial osteotomy detailed on OrthOracle at Supra malleolar osteotomy.