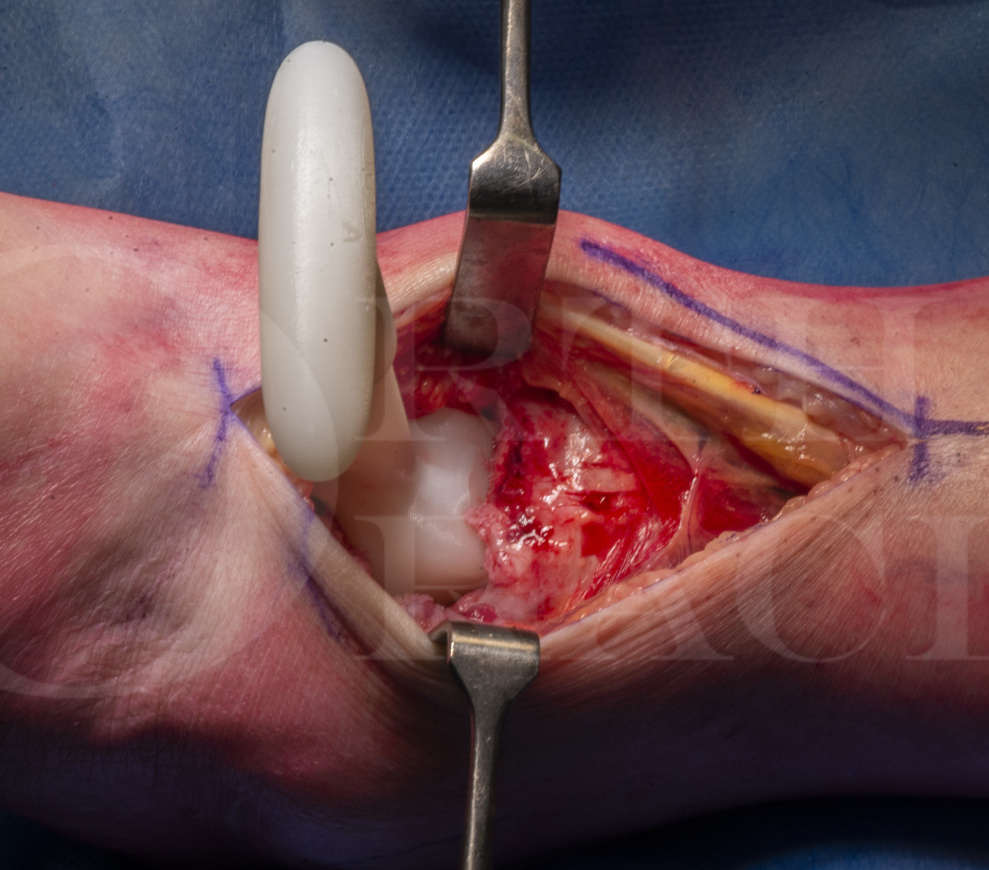 Avascular necrosis (AVN) of the talus presents a challenge to the surgeon to offer pain relief with minimal loss of function to the foot and ankle. In the event of failure of non-operative treatment methods, surgical treatment is limited by the extent of necrosis within the talus and any secondary degenerative changes to the neighbouring joints.

Avascular necrosis, also know as aseptic necrosis or osteonecrosis, of the talus is an uncommon condition. The most frequently seen aetiology is secondary to trauma with fracture either to the body or the neck of the talus  accounting for 75% of cases. With these high energy injuries, there is often traumatic disruption of the tenuous blood supply either as a result of the fracture and/or by poorly planned surgical approaches to treat the injury. The remaining 25% of aetiologies are as a result of long-term corticosteroid therapy, alcoholism, hyperlipidaemia, irradiation/chemotherapy, anti-HIV therapy, thrombophilia and idiopathic causes.

The talus is particularly prone to AVN because of its precarious blood supply. It has no muscular origins or insertions and 60% of its surface area is covered in articular cartilage. It receives its blood supply from branches of the posterior tibial artery, the peroneal artery and the dorsalis pedis artery through multiple intra-osseous and extra-osseous anastomoses.

The disease process can be staged in a similar manner to avascular necrosis (AVN) of the femoral head using a modified Ficat & Arlet classification to assess radiographic findings:

In its early stages, patients may present with pain and swelling with no evidence of collapse on any forms of imaging. In these instances, most surgeons would advocate a period of cast or boot immobilisation with restrictions placed on the amount weight borne through the affected limb. A patellar tendon bearing cast may have a role in sparing weight through the diseased talus. Some papers even advocate the use of extra-corporeal shock wave therapy. As in early staging of AVN of the femoral head (stage I disease), bone and joint sparing surgeries, in terms of core decompression and either vascularised or non-vascularised bone grafting, have been described and advocated.

In stage II to III disease, in the absence of progressive arthritis or collapse of the body of the talus with minimal deformity, surgical treatment options are usually limited by the extent of osteonecrosis. For example, if the area of osteonecrosis is limited to the dome of the talus, an isolated ankle arthrodesis may be considered. This is clearly dependent upon good imaging to identify disease extent.

Total ankle replacement is relatively contra-indicated in this condition simply because any talar re-surfacing component needs a firm bony foundation on which to be seated. In my opinion, planning the surgery for this condition is entirely dependent upon being certain of the viability of the talus by using MRI and CT to assess the extent of avascularity within the bone. It is usual for the head and neck of the talus to be relatively spared of AVN. In these earlier stages of AVN the ankle, subtalar and talo-navicular joints are relatively spared.

Treatment options for stage IV disease depend upon the extent of the osteonecrosis. In the presence of collapse of the body of the talus combined with ankle and subtalar arthrosis, resection of the dead bone leaves a void that either requires grafting with bulk allograft or a custom truss as detailed on OrthOracle at https://www.orthoracle.com/library/ttc-double-fusion-using-4web-custom-talar-replacement-and-oxbridge-nail-orthosolutions/with tibio-talo-calcaneal fusion or ignoring the void and fusing the distal tibia to the calcaneus. In the presence of significant arthrosis, it may be that a total talar replacement would be less effective at achieving pain relief if it articulated against bare bone at the joint surfaces much in the way that a hip hemiarthroplasty for fracture is sore in the presence of acetabular arthrosis. This remains an unanswered question.

In this particular case, a lady in her sixth decade presented with an 18-month history of severe pain and swelling in her ankle that was exacerbated by bearing weight but was unremitting at night. With no history of injury and no other risk factors, the cause of her symptoms was diagnosed as being from idiopathic AVN of the whole of her  talus. Imaging suggested whole bone involvement with cyst formation, subchondral fracturing but in the absence of degenerative changes to the neighbouring joints and with minimal deformity. With whole talar disease, the options of arthrodesis are limited to pan-talar fusion with or without filling the void left by any resected talus.

The literature offers some experience of dealing with this scenario in AVN, extensive osteochondral lesions and benign tumours of the talus using partial or total talar resection and replacement (see results section). One advantage that the talus has over most other bones is that it has no tendon origins or insertions. It is a stable intercalated segment due to its complex bony geometry and the fact that it is contained by strong capsular ligaments. Therefore, it does allow itself to be replaced by a prosthesis with a degree of confidence from the surgeon that this should be stable.

After careful discussion, my patient decided she was keen to preserve joint motion and to consider a custom-made articulated total talar replacement. The consent for this novel technique is complex insofar as the only outcome data is limited to the literature detailed later in the results section. Ultimately, failure of the talar replacement would lead to pantalar/tibio-calcaneal fusion in some format which is the other initial treatment option. In terms of following up a case such as this, I would treat this part of managing the patient in exactly the same way as a total ankle replacement with regular long term follow-up.

At present, the technology to develop total talar replacements using additive manufacturing techniques is in its relative infancy. Undoubtedly, many companies across the globe will offer this service but my rationale for choosing 4WEB was their overwhelming experience in leading the field in manufacturing prostheses that have had some follow-up in the scientific literature. In the UK  4WEB implants are supplied by Orthosolutions.