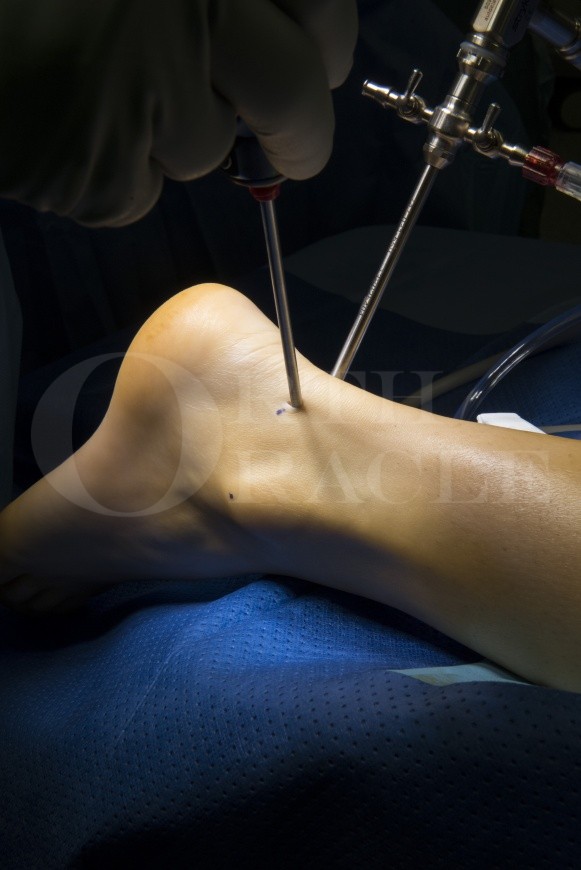 Posterior ankle impingement may occur as a result of an acute injury such as an ankle sprain, or as a result of repetitive trauma. The anatomy of the posterior ankle plays an important role in the syndrome. The most common predispositions tend to be osseous, such as an Os Trigonum, a Steida process, a prominent posterior tibial plafond or a posterior tibial osteophyte, or. Less frequently the impingement is soft tissue,  related to a thickened posterior capsule, scar tissue or calcific bodies. The common feature of all these pathologies is that they predispose to compression during plantar flexion.

The most common cause of posterior impingement is the Os Trigonum, The ossific Os appears between 7 and 13 yrs of age and fuses to the body of the talus within 1-2 years, forming a trigonal (steida) process of varying size. In 10% of patients, it remains a distinct ossicle. The Os Trigonum can become symptomatic due to abutment between calcaneum and tibia, or due to disruption of the fibro-cartilagenous synchondrosis.

the structures at risk during the surgery, include the achilles tendon, the flexor hallucis longus tendon, the sural nerve  and the tibial nerve, and a comprehensive understanding of the anatomy of the posterior ankle is important when plotting ones approach.

Parisien first described the technique to assess the posterior subtalar joint in 1985, this was popularised by Van Dijk in 2000 when he reported successful posterior arthroscopic treatment of a Ballerina presenting with an Os Trigonum and FHL  tendinosis.