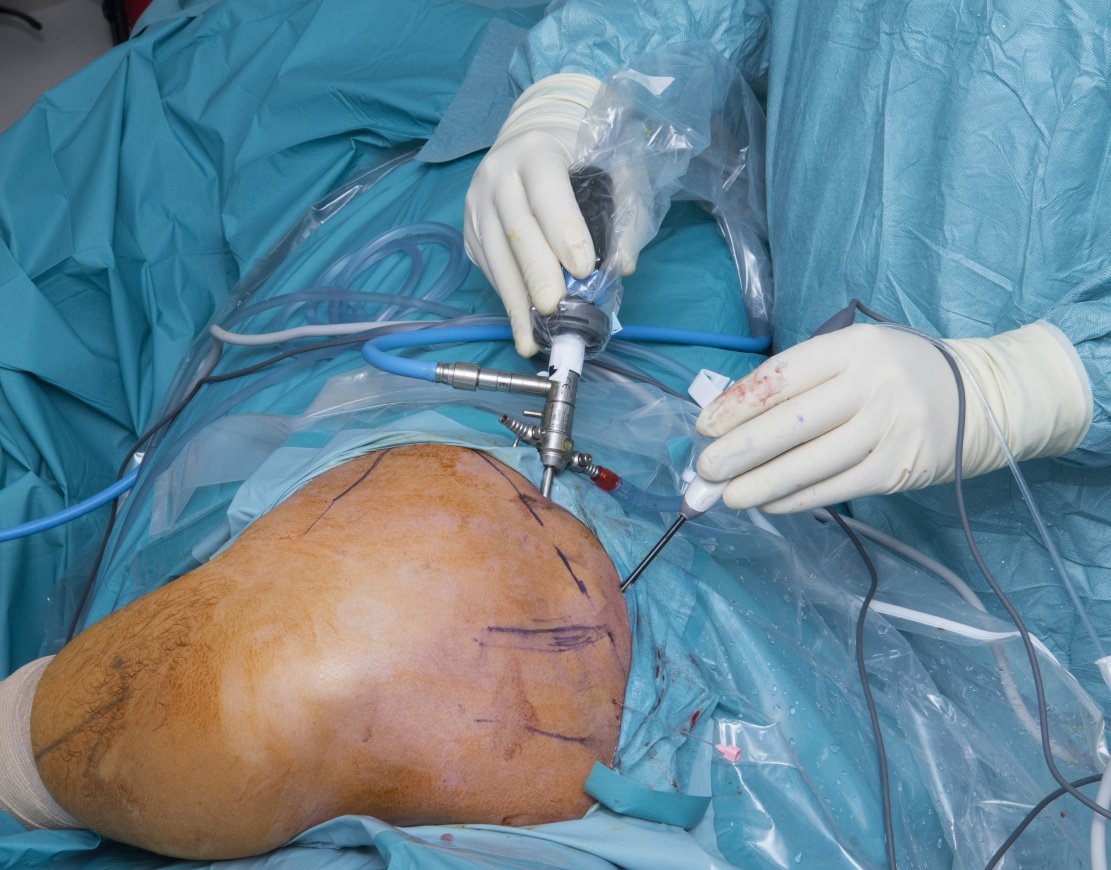 Snapping scapula syndrome, also known as scapulothoracic crepitus or bursitis, was first described in 1867 by Boinet. The sound is produced by a tactile-acoustic phenomenon occurring as a consequence of  anomalous tissue between the thoracic wall and the scapula. While in most patients these sounds are an isolated irregularity not associated with symptoms some report a clear correlation between the sounds and pain.

The scapula has two surfaces (ventral and dorsal), three borders (superior, axillary, and vertebral), and three angles (superomedial, inferomedial, and lateral). The scapula, in its static resting position, lies approximately 5 cm lateral to the spine on the posterior aspect of the thorax, is angled 30° to 40° in relation to the coronal plane, and is tipped anteriorly 10° to 20° with respect to the sagittal plane.

Scapulothoracic bursitis may occur following a single traumatic insult or as a result of a series of repetitive motions of the scapulothoracic joint. In most cases, the bursitis is believed to be caused by abnormal motion between the anterior surface of the scapula and the thoracic cage

Scapulothoracic crepitus may be produced by an unusual shape of the scapula. Approximately 6% of scapulae demonstrate a hook-shaped prominence, known as the Luschka tubercle, at their superomedial angle. This tubercle may enlarge and articulate with the thoracic cage, resulting in painful crepitus.

Osteochondroma is the most prevalent benign tumor of the scapula and has been implicated as a common cause of snapping scapula syndrome. Other, less common, skeletal causes of scapulothoracic crepitus include skeletal exostoses and other osseous tumors, especially if they arise from the ventral surface of the scapula, and fracture malunion of either the ribs or the scapula. The scapula is also the second most frequent location of chondrosarcoma, which must be considered in the differential diagnosis of any lesion in the scapulothoracic space.

Scapulothoracic bursitis may also occur following loss of dynamic control of scapular motion. Abnormal scapular motion can be caused by muscle overuse, muscle imbalance following nerve injury, or pathological conditions of the glenohumeral joint. Muscle atrophy secondary to nerve injury, trauma, or prior operative treatment can lead to diminished soft-tissue interposition between the scapula and the thoracic cage, resulting in scapulothoracic crepitus and pain. When soft-tissue interposition is diminished, the scapula tilts, and thus a normally shaped scapula can appear to have an abnormally curved shape and dig into the chest wall. The superomedial angle of the scapula then impinges along the chest wall during scapulothoracic motion and creates inflammation in the scapulothoracic space. Atrophy of the serratus anterior following injury to the long thoracic nerve as well as subscapularis atrophy in patients with thoracic outlet syndrome have also been implicated as etiologies of scapulothoracic crepitus.

Normal scapular motion along the thoracic cage is particularly important to athletes, and a history of overuse during activities such as swimming, pitching, weight training, gymnastics, and football has been implicated in the onset of symptoms.