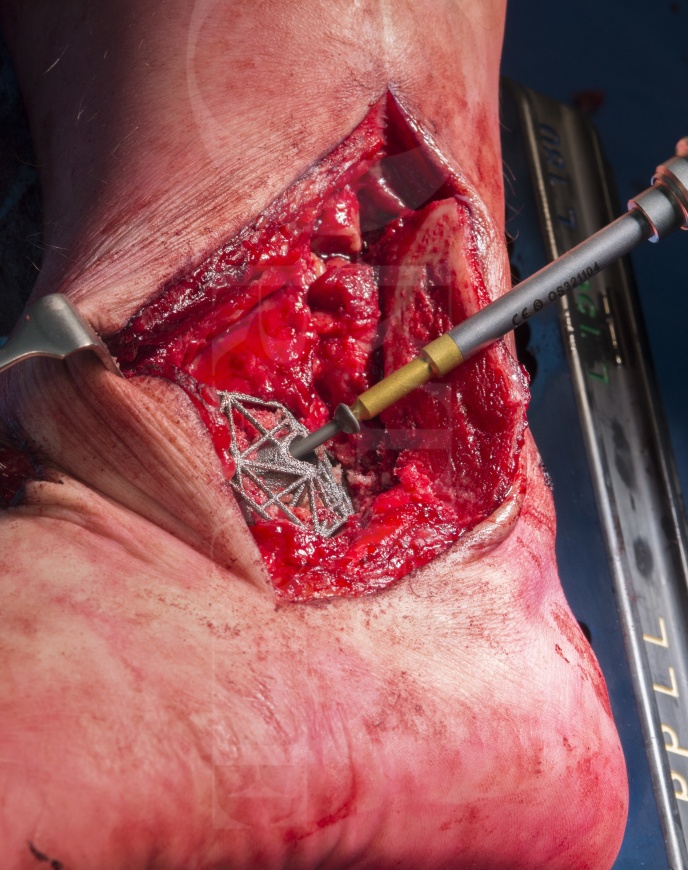 Avascular necrosis (osteonecrosis) of the talus is an uncommon condition. The most frequently seen aetiology is secondary to trauma with fracture either to the body or the neck of the talus (75%). With these high energy injuries, there is often traumatic disruption of the tenuous blood supply either as a result of the fracture and/or by poorly planned surgical approaches to treat the injury. The remaining 25% of aetiologies are as a result of long-term corticosteroid therapy, alcoholism, hyperlipidaemia, irradiation/chemotherapy, anti-HIV therapy, thrombophilia and idiopathic causes. The talus is particularly prone to AVN because of its precarious blood supply. It has no muscular origins or insertions and 60% of its surface area is covered in articular cartilage. It receives its blood supply from branches of the tibial artery, the peroneal artery and the dorsalis pedis artery through multiple intra-osseous and extra-osseous anastomoses.  The body of the talus is particularly prone to deficiencies in blood supply.

The disease process can be staged in a similar manner to avascular necrosis (AVN) of the femoral head using a modified Ficat & Arlet classification to assess radiographic findings:

In its early stages, patients may present with pain and swelling with no evidence of collapse on any forms of imaging. In these instances, most surgeons would advocate a period of cast or boot immobilisation with restrictions placed on the amount weight borne through the affected limb. A patellar tendon bearing cast may have a role in sparing weight through the diseased talus. Some papers even advocate the use of extra-corporeal shock wave therapy. As in early stages of AVN of the femoral head, bone and joint sparing surgeries (in terms of core decompression and either vascularised or non-vascularised bone grafting) have been described and advocated.

In stage IV disease, where there is progressive arthritis and collapse of the body of the talus, reconstructive options are limited. Total ankle replacement is relatively contra-indicated in this condition simply because any talar re-surfacing component needs a firm bony foundation on which to be seated. In my opinion, planning the surgery for this condition is entirely dependent upon having the absolute knowledge of the viability of the talus by using MRI and CT to assess the extent of avascularity within the bone and the state of both the ankle and subtalar joints. In cases where the subtalar joint is relatively uneffected an ankle fusion, by either by arthroscopic or open means, is preferable as a patient benefits functionally from a functioning subtalar joint.

In cases where the whole body of the talus is involved, a tibio-talo-calcaneal fusion can be considered and in some authors hands the results are very encouraging (see results section). In my experience however it is difficult to achieve fusion of both joints with an avascular talus. Indeed, the use of allograft femoral head has been a previous option in my practice. Even though the avascular talar bone is fairly normal in its morphology, it is  only acting as an osteoconductive framework and runs the risk of collapsing with re-vascularisation. Other fusion options include a tibio-calcaneal fusion(having excised the talus) but then there are issues with dealing with the inevitable resultant loss of limb length.

Given there is no ideal existing intervention for the situation where both ankle and subtalar joint are degenerate and associated with stage 4 change it is worthwhile considering innovative treatment  strategies. To this end, one can consider an off-the-shelf metallic implant such as Zimmer Biomet’s Trabecular Metal spacers, or to consider a customised talar body replacement to fill the void after talar body excision such as the 4WEB (Orthosolutions).

In this particular case, a gentleman in his 50s presented with collapse of his left talar dome secondary to AVN, 2 years after sustaining a complex fracture-dislocation involving the body and neck of his left talus (Hawkins III). He was referred to me in the knowledge that I had previously used 4WEB for this indication and therefore a customised 4WEB was planned as the definitive treatment.