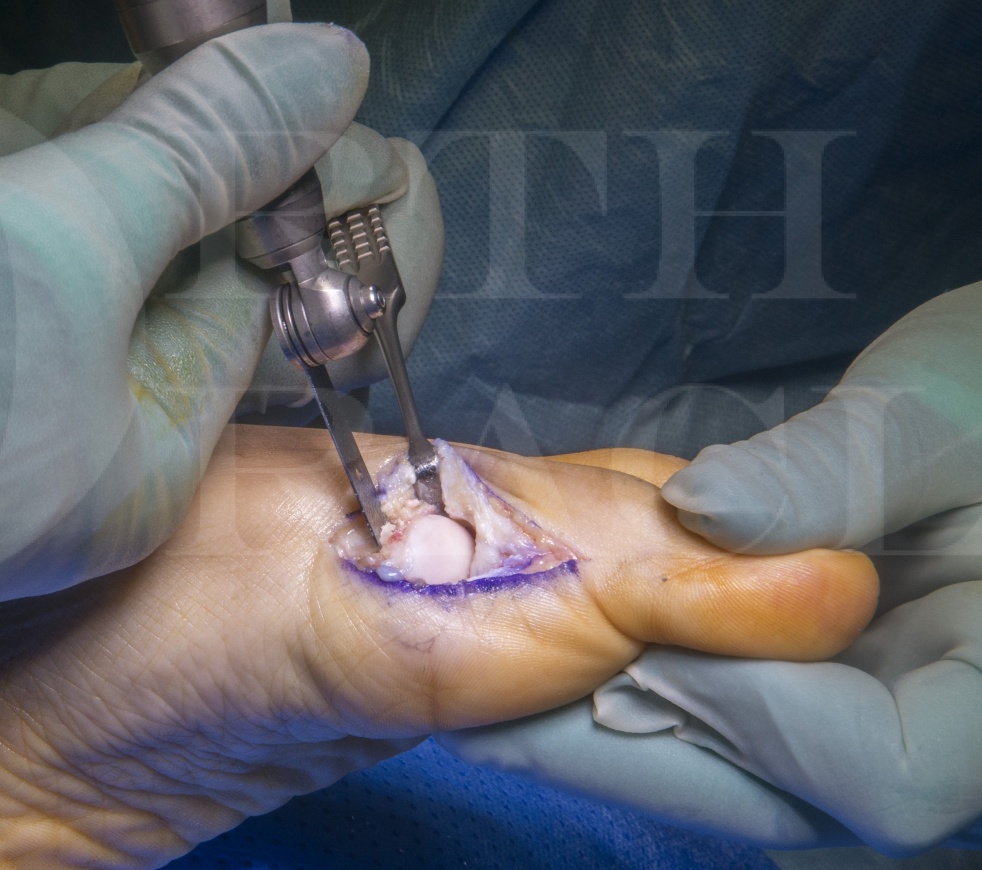 The aetiology of hallux rigidus is multi-factorial. Causes include trauma, osteochondritis dissecans, inflammatory arthropathy and iatrogenic injury. A proportion of cases are thought to be related to metatarsus primus elevatus. This was first noted by Lambrinudi In 1938 who described impingement pain and progressive degenerative change result from a mechanical malalignment of the 1st metatarso-phalangeal joint, with an eccentrically located centre of rotation of the 1st metatarsal head. Patients will frequently present with a reasonable range of movement in the non-loaded foot at the 1st MTP joint but a notable restriction in movement in the loaded foot, sometimes called a “functional hallux limitus”. Radiographic findings in metatarsus elevatus, are of a variable degree of degenerative change within the joint, and on the lateral weight bearing view, the proximal phalanx lies in a flexed position relative to the metatarsal head, and the 1st metatarsal is elevated relative to the lesser metatarsals. Patients may present with a dorsal prominent at the 1st metatarsal head which is out of proportion to the small or absent dorsal osteophyte.

Austin first described a distal shortening planterising osteotomy for the treatment of metatarsus primus elevatus in 1962. Youngswick modified the Austin technique to allow a plantarisation and proximalisation of the 1st metatarsal head, which he described in 1982. A number of other distal metatarsal osteotomies including the Watermann-Green osteotomy, the V-osteotomy and Weil’s osteotomies have been described to address the problem.

Bryant in 2004 treated 23 feet with mild to moderate hallux limitus with 2 years of follow-up and found that the Youngswick osteotomy produced a significant increase in the range of movement and dorsiflexion in the 1st MTP joint in patients with mild to moderate hallux limitus. They found that pressure measurement showed peak pressure beneath the hallux of the 1st metatarsal remained unchanged. However, peak pressure was significantly increased through the 2nd metatarsal and reduced in the 5th metatarsal, the concluded that post-operatively the foot functioned in a less inverted and more physiological pattern, and that the procedure was associated with a high patient satisfaction.

In a journal of foot and ankle surgery 2016, Slullitel looked at 78 patients who had undergone a Youngswick osteotomy for stage 2/3 hallux rigidus and assessed the 1st metatarsal length as being longer, equal or shorter than the 2nd metatarsal pre-operatively. They recorded high patient satisfaction. 97% of patients would recommend the procedure to family members. There was no difference between the groups in relation to transfer metatarsalgia or complication rates. They concluded that the procedure had high satisfaction rates, independent of 1st metatarsal length.

The Youngswick plantarising shortening 1st metatarsal osteotomy is a useful surgical adjunct for management of hallux rigidus in mild to moderate hallux rigidus, especially useful in those patients with a metatarsus elevatus and a well preserved range of movement in the unloaded foot compared to the loaded foot.

Youngswick-Austin versus distal oblique osteotomy for the treatment of Hallux Rigidus. Foot(Edinburgh). 2107 Aug;32:53-58.