Fusion of the syndesmosis for isolated distal tibio-fibular arthritis 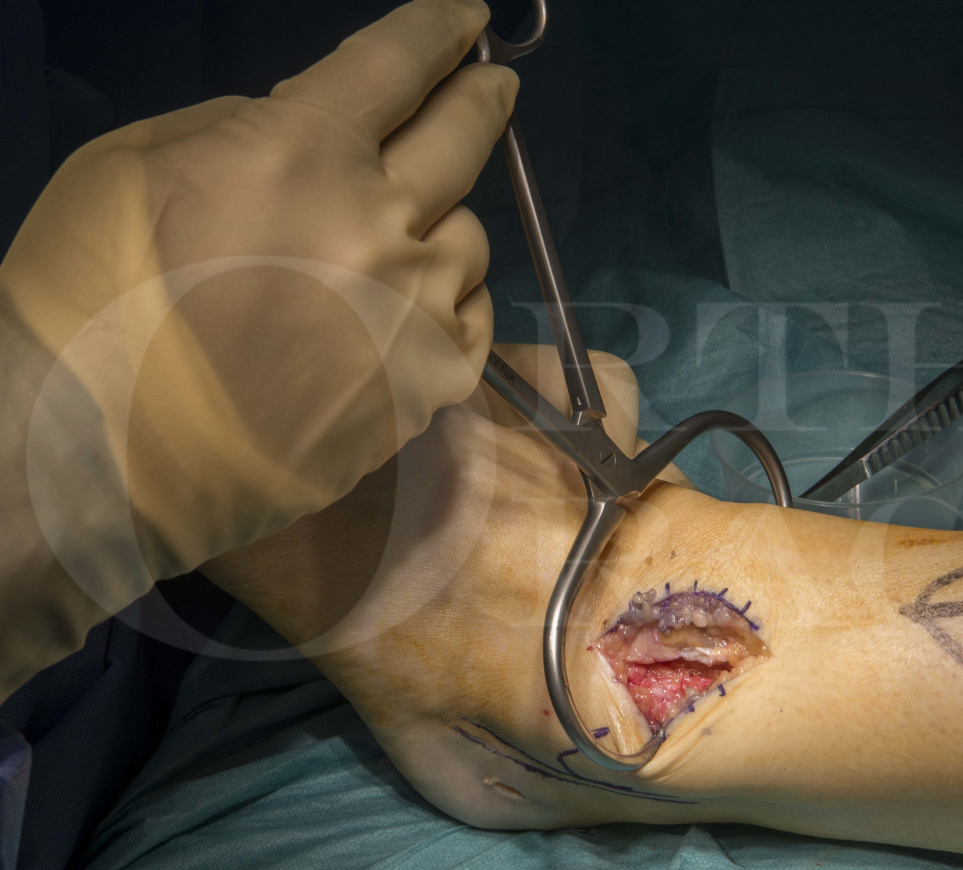 The distal tibiofibular syndesmosis is a unique syndesmotic joint powerfully bound by a variety of ligaments to maintain the integrity of the ankle mortise. The distal anatomy of the two bones are created in such a way that the medial surface of the distal fibula fits into a groove on the lateral surface of the distal tibia called the incisura fibularis which offers the bony stability to this joint. The anterior part of this joint is stabilised by the Anterior Inferior Distal tibiofibular ligament (AITFL), the posterior aspect by the Posterior Inferior Distal Tibiofibular ligament (PITFL) and the transverse tibiofibular ligament. Directly between the contiguous surfaces of the tibia and fibula is the interosseous ligament which extends throughout the leg offering origins and beds for a number of muscular and neurovascular structures. The PITFL is by far the strongest ligament in this complex and is the least likely to be ruptured. Once ruptured however the PITFL is most likely to be associated with severe rotational or dislocating injuries of the ankle and associated ankle instability.

The anterior part of the distal tibio-fibular joint is covered by cartilage for a small part behind which lies the syndesmotic recess  and a fat pad. There is a small amount of movement afforded by this joint which includes about 2-3 degrees of external rotation of the fibula relative to the tibia. This occurs with widening of the syndesmosis by about 1 mm in maximal dorsiflexion of the ankle to allow the broadest part of the talar dome excursion through the mortise. This is possible due to the a small amount of isometric stretching of the ligaments and is essential for normal ankle movement. The function of the mortise is mainly to stabilise the ankle, keeping the talus congruous with its articulating osseous partners in all normal “physiological” positions by resisting rotational, translational and angular forces.

Thus the syndesmosis is a pivotal structure in maintaining the anatomy and physiological function of the ankle. The syndesmotic ligaments are injured in rotational and translational injuries of the ankle. Approximately 10% of ankle sprains are associated with syndesmotic injury and symptoms from this so called ‘high ankle sprain’ can persist for several months after injury. Sadly this can often be missed and has significant consequences for the future of the ankle.

The syndesmosis is disrupted often in conjunction with the medial deltoid ligament in over 50% of supination external rotation and almost all pronation external rotation/abduction injuries.  Such disruption allows more than the required physiological shift of the talus within the ankle. 1 mm of talar shift decreases tibiotalar contact area by about 40 % and significantly increases the contact pressures at the articular surfaces which can lead to early onset arthrosis.

Occasionally  osseous trauma to the bones of the  syndesmosis can render the syndesmosis incongruous and eventual arthritic and can present as syndesmotic pain which is often as disabling as more extensive ankle arthritis.

In this particular case a middle aged female patient suffered a fracture of the  tibia at the junction of the middle and lower thirds with an intact fibula. This was a short spiral fracture and was treated by closed intramedullary nailing with dynamic proximal and static distal locking with 2 locking screws from medial to lateral. It was noted that these screws were long and broached the cortex of the syndesmotic surface of the medial aspect of the lateral malleolus. This chronic abutting on the syndesmotic fibular surface appears to have caused injury to the surface with ongoing painful symptoms long after the tibial fracture was deemed to be healed and the distal screws removed. A CT SPECT confirmed the site of activity as within the distal syndesmosis and selective injection into the syndesmosis gave excellent but temporary relief of pain. It was then decided to undertake an in situ fusion of the syndesmosis after confirming that the incisura and the fibula were congruous and there was no significant loss of bone.  Bone graft was used along with 2 partially threaded cancellous screws to fuse the joint. The patient felt immediate relief of pain even whilst in plaster and after removal was asymptomatic