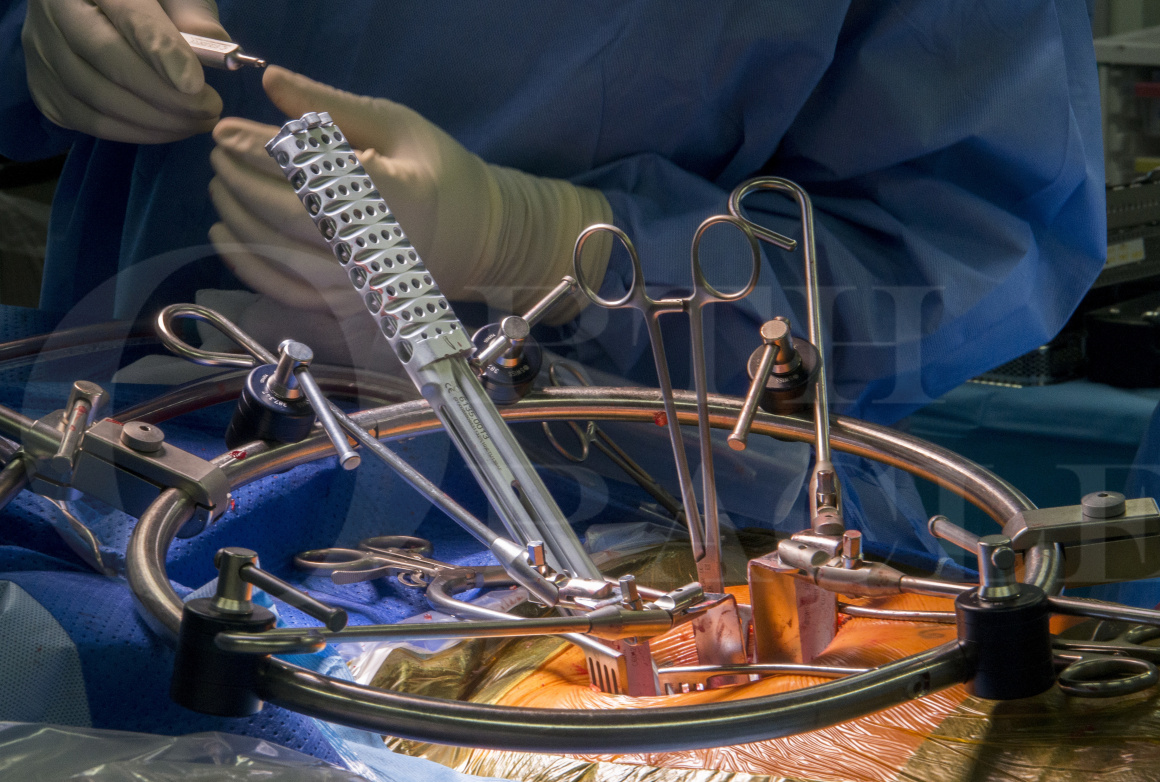 Anterior approaches for spine operations have increased in popularity of late but they are in no way a new concept. The Anterior Lumbar Interbody Fusion (ALIF) was first described in 1932 for the treatment of spondylolisthesis. It has the longest history of use of the various interbody fusion techniques.

This is a case of a lady in her mid thirties presenting with a short history (12 months) of both low back pain and bilateral buttock / radicular leg pain (in keeping with a L5 distribution). Imaging demonstrated a L5/S1 low-grade isthmic spondylolisthesis. She had failed non-operative management (regular analgesia & physiotherapy). She had been seen by the pain team prior to referral and underwent bilateral L5 root sterioid and Local anaesthetic injections which led to a temporary improvement in symptoms.

Terminology: Spondylolysis refers to an acquired anatomic defect in the vertebral pars interarticularis and is most commonly observed in the lowest lumbar vertebrae.

Spondylolisthesis means slipping of one spine vertebra on another. It is derived from the Greek words Spondylo, meaning vertebra, and Olisthesis (also known as the etymologically less correct listhesis), meaning slipping or sliding.

The term Spondylolisthesis describes what is seen (slip of one spine vertebra on another), but not what causes it. Spondylolysis is one possible cause and termed isthmic.

This case is of a patient presenting with an L5/S1 isthmic spondylolisthesis therefore further discussions will center on this pathology.

The incidence of lumbar spondylolysis is broadly estimated to be approximately 6% in the general population but the incidence varies considerably according to ethnicity and sex. Spondylolysis is more common in the Eskimo population with an incidence as high as 50% reported. Most studies report the incidence higher in males than in females. Several authors have reported a hereditary predisposition, citing a high rate of occurrence among family members.

The incidence is increased in young athletes, especially in those involved in sports requiring repetitive flexion/extension and/or hyperextension (fast-bowl cricketers, weightlifters and gymnasts) and studies have reported the incidence of spondylolysis to be as high as 23-63% in those engaging in certain sporting activities.

The pathogenesis of lumbar spondylolysis remains controversial. Originally spondylolysis was considered to arise from a congenital failure of fusion of two ossification centres or hyper-flexion injury at birth, but spondylolysis has not been reported in foetuses or babies at birth.

The most probable mechanism of lumbar spondylolysis is multifactoral; but results in a stress fracture occurring through a congenitally weak or dysplastic pars interarticularis.

Approximately 80-85% of spondylolysis occurs at L5/S1. This is likely due to forces in the lumbar spine being greatest at these levels and the facet being more coronal in orientation.

As stated, non-operative treatment of lumbar spondylolysis and spondylolisthesis is preferential; however, a number of surgical treatment approaches exist should conservative management fail.

Anterior lumbar interbody fusion (ALIF) is one such surgery indicated for isthmic spondylolisthesis (and a range of other spinal pathologies). When compared with posterior fusion techniques, ALIF potentially allows for superior interbody column support, fusion rates, restoration of sagittal balance and restoration of the disc and foraminal height.

Standalone ALIF use is widely documented in the literature. Benefits of standalone ALIF include the ability to avoid posterior muscle damage and epidural fibrosis (from posterior neural decompression). The ALIF, by inserting a large anterior spacer, allows indirect decompression of the exiting L5 nerve roots by increasing the height of the foramen.

Currently, there is insufficient evidence to recommend use of standalone ALIF in treating this specific pathology (grade I lytic L5/S1 spondylolisthesis) and I am clear with patients that although I do not routinely instrument posteriorly, I closely monitor them post operatively and if I believe there is cage subsidence or evidence of movement, I will augment their fixation.