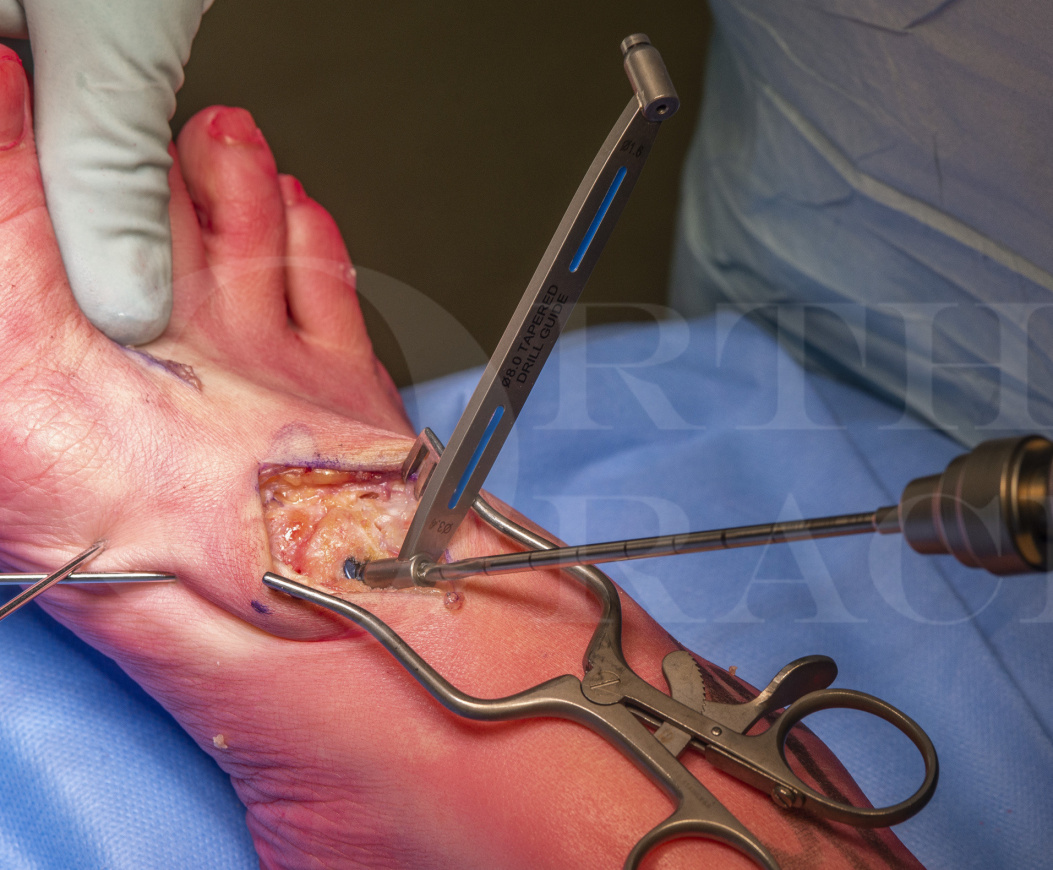 Arthrodesis of the first tarso-metatarsal joint (1TMTJ) is indicated for three main pathologies: symptomatic arthritis of the 1TMTJ, hallux valgus deformity and in some Lisfranc injuries involving the medial ray. Although the technique was already well established, in 1934 Paul Lapidus wrote up his experience in arthrodesing the 1TMTJ for hallux valgus and his name has been attributed to this procedure for this indication ever since. Further papers written by Lapidus honed his indications to those patients with hallux valgus in the presence of a fixed metatarsus primus varus and those with an inter-metatarsal angle (IMA) of greater than 15 degrees. Currently, surgeons will also consider the use of the Lapidus procedure in the presence of 1TMTJ instability. In the UK, the technique is not universally popular because most hallux valgus deformity can be corrected by the scarf osteotomy which is versatile  in being able to correct a wide spectrum of deformities and has the benefit of behaving as other forefoot osteotomies for hallux valgus, in terms of patient recovery, whereas the Lapidus procedure is very much considered a midfoot arthrodesis. My indications for the procedure are for hallux valgus in the presence of ligamentous laxity and with those patients with a very wide forefoot because of severe hallux valgus.

Various modifications to the original technique have been suggested. Some authors have passed a screw between the shafts of the first and second metatarsal in order to augment stability at the 1TMTJ fusion mass. This has also been vaunted as a means of allowing the patient to commence early weight bearing, but I think this is a huge demand on a single small fragment-sized screw. Additionally, it can fix the relationship between the two metatarsals leading to metatarsalgia. Other modifications have revolved around attempts to restore length and correct deformity by using bone graft either in the form of tri-cortical blocks or in morcellised form. These modifications tend to have higher non-union rates than in providing simple bony apposition.

Finally, why I.O. Fix? The I.O. Fix system offers great compression by metalwork that is well buried and lying in the anatomical axis of the first ray. Intuitively to me, this is a good biomechanical solution to stabilising the 1TMTJ. Previously, I have tried using two dorsally placed crossed screws and have always found it a challenge to find enough space for the second screw. As a result I have tried a single lagged dorsal screw with a medially placed locked plate to provide orthogonal neutralisation. However, creating space for the plate can be challenging especially as some mobilisation of the tibialis anterior tendon and its insertion can be difficult. I have concerns about any medial plate causing attritional damage to this tendon. Using a long “X-post”, I feel that the I.O. Fix provides sufficient compression across the depth of a deep joint and has the advantage of being very low profile. Some surgeons use a second orthogonally placed I.O. Fix but, again, I struggle to see where there is sufficient room for this. Lastly, some authors prefer a plantar plate for arthrodesis of the 1TMTJ because it is biomechanically favourable. Although, I agree that this forms a more rigid construct with the plate on the tension surface, I find the dissection difficult and do not feel that the plate seats well on the bony contours.

There are some issues with using the I.O. Fix system. It may work less well in osteopenia and I would always suggest the first metatarsal is manually reduced onto the medial cuneiform after preparation and the lag screw is gently applied across the joint to hold that degree of compression. In my experience, the implant needs to be used methodically in order to make it work.  Because the compressive mechanism is so strong, if the surgeons relies on the lag screw to “draw” the first metatarsal onto the medial cuneiform, there is a danger of the lag screw cutting out.