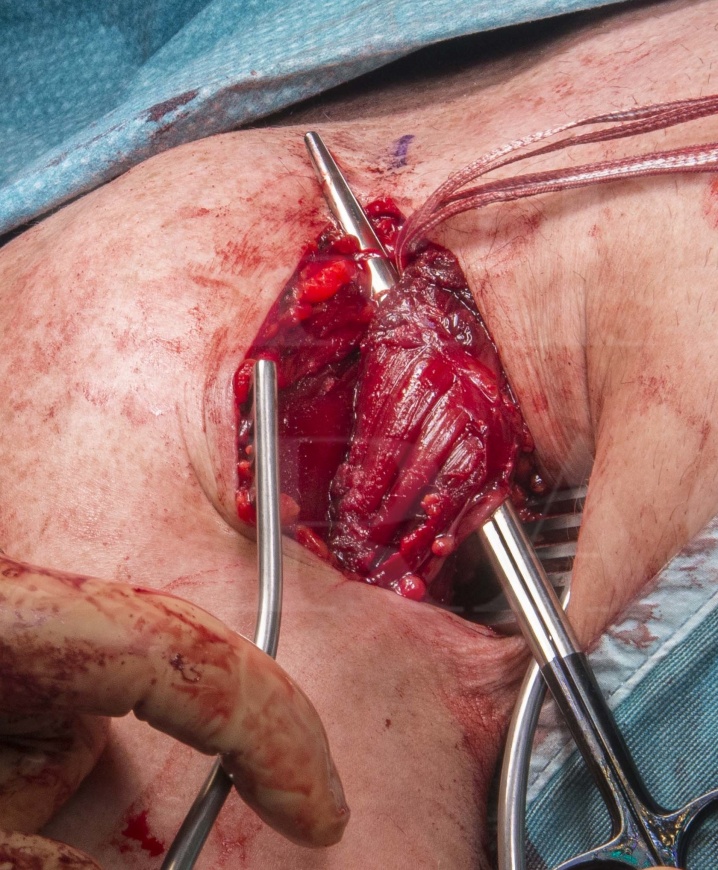 The pectoralis major muscle is a fan shaped muscle the sits on the anterior aspect of the chest wall. It arises from the anterior surface of the sternal half of the clavicle, the anterior half of the sternum to the costal cartilages of the first six ribs and the aponeurosis of the external oblique muscle. As the muscle fibres converge towards its insertion on the proximal humerus, they form two distinctive insertions. The clavicular head fibres run obliquely inferiorly and laterally and inserts superficially. The sternal head fibres run more horizontally, whereas the inferior fibres run obliquely superiorly and laterally. The more inferior fibres tend to twist up and insert deeper and more superiorly on the proximal humerus. The fibres end up in a flat tendon around 5cm in diameter and insert into the lateral lip of the bicipital groove of the humerus.

The main muscle actions of pectoralis major include flexion, adduction, internal rotation and extension (from a flexed position) of the humerus. It also acts as a dynamic stabiliser of the shoulder.

Ruptures of pectoralis major are rare but largely effect athletic populations, particularly weight-lifters. It predominantly affects males due to larger tendon to muscle ratio, greater elasticity and less energetic injuries occurring in males. This can result in weakness, pain and cramping.

A very useful implant for the fixation of these rare injuries, and my preference, is using the Arthrex Large Pec Button Kit. This consists of a 3.7mm drill pin, 3 large Pec buttons with inserters, 2mm Fibretape x3 and number 5 Fibrewire x3. I prefer to use a Krakow stitch using the Fibretape in the ruptured pectoralis major tendon as it has better pullout characteristics due to the larger surface area of the tape. Two or three Pec buttons provide a robust fixation spread over a large area and restore the anatomy of the insertion of pectoralis major.