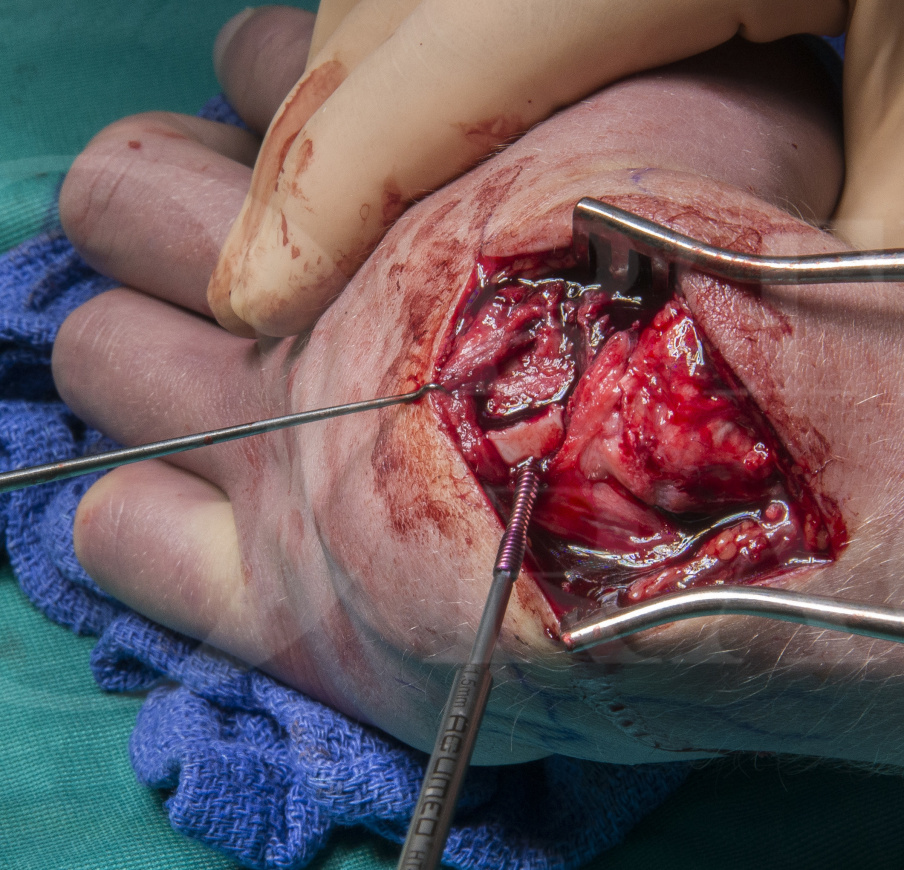 This is a detailed step by step instruction through the procedure of a vascularised graft for scaphoid non-union. The graft used in this case is based on the  1-2 intercompartmental supraretinacular (1,2-ICSR) artery, a branch of the radial artery. It is also often referred to by the name of the surgeon who described it in 1991, Zaidemberg (J Hand Surg Am. 1991 May;16(3):474-8).

The graft, which is accessed via a dorsal approach, is most commonly used for proximal pole non-unions. The scaphoid and graft were then fixed with a Micro Acutrak TM screw in this case.

Scaphoid non-unions in general are best diagnosed and morphology assessed using a CT scan, although they are usually clearly seen in a scaphoid series of radiographs. An MRI can be used to try to assess the vascularity of the proximal fragment in proximal pole fractures however MRI scans (with or without Gadolinium enhancement) are far from infallible and the gold standard test for vascularity remains punctate bleeding from the bone intra-operatively.

When an non-union is established (minimum 6 months duration), symptomatic and without associated arthritis, it usually requires treatment for which there are a number of options available. Non-operative treatment with splint and analgesia or less invasive procedures such as wrist denervation are often used in cases where the patients are older or patients do not want major surgery. However as the natural history of the scaphoid non-union is to develop arthritis over 5-10yrs then surgical treatment to unite the scaphoid is indicated for the majority of cases.

The exact nature of the potential surgery will often vary depending on the amount of collapse of the scaphoid, sclerosis or cyst formation around the non-union, the location of the non-union within the scaphoid and the preferences of the surgeon.

Options include compressive screw fixation, k-wire, staple or plate fixation with or without graft. Grafting open or arthroscopic which can be vascularised or non-vascularised, cancellous or cortico-cancellous with the most common donor sites being distal radius and iliac crest.

Following an scaphoid grafting and screw fixation patients are usually placed in plaster cast for 6-8 weeks with physio therapy of the fingers and thumb followed by cast removal and physiotherapy of the wrist once union is confirmed radiologically and clinically.