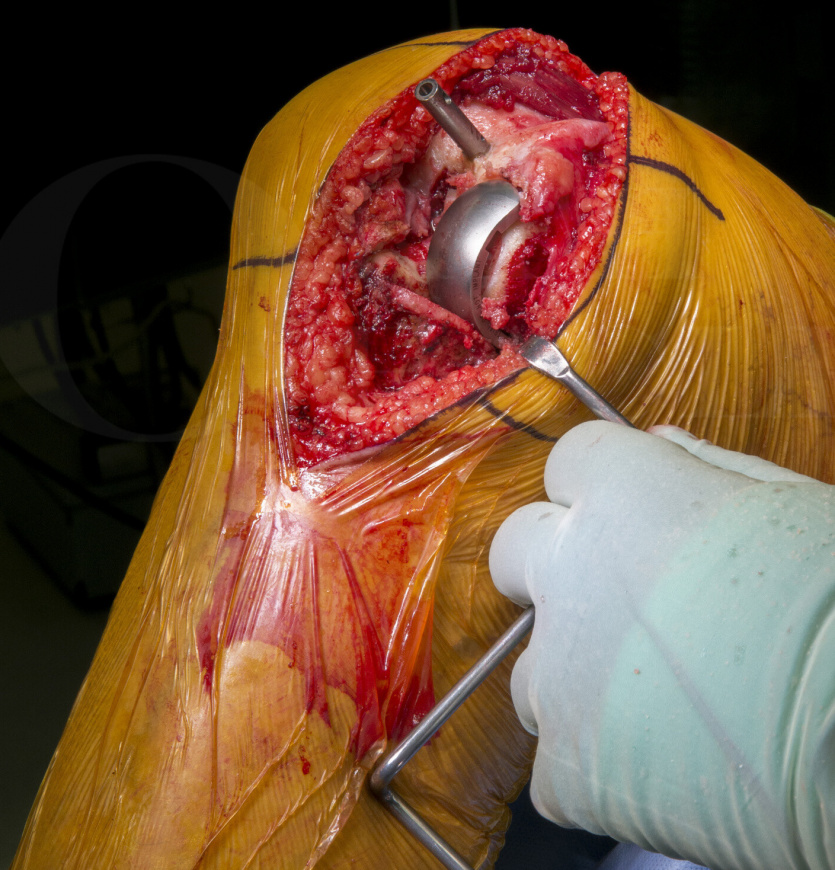 Osteoarthritis of the knee is one of the most common causes of painful loss of mobility and is the main indication for knee replacement surgery.

The principle of  interposition arthroplasty, when material is interposed between the bone ends to prevent them from becoming adherent, was first suggested by Verneuil in 1860. Many reports of subsequently appeared in the literature of the results of interposition arthroplasties using a variety of materials; these include pig bladder (Baer 1918), fascia lata (Putti 1920), vitallium (Campbell 1940), cellophane (McKeever 1943), nylon (Kuhns 1950) and skin (Brown 1958). In 1950 McKeever described a unicompartment prosthesis to be placed on the tibial condyles, this prosthesis was later modified by MacIntosh.

In 1965 Mackintosh performed the “MacIntosh partial knee replacement” at The London Hospital. A subsequent paper recorded a high complication rate of 46% and majority of patients describing a “poor” result.

The attention of designers and surgeons then focused on improvement of implants for total knee replacements. A large body of surgical opinion at the time concluded that osteoarthritis of the knee was a disease of the whole joint (like osteoarthritis of the hip) and that common sense required the replacement of all the articular surfaces to provide long-term relief of symptoms.

During the 1970s and 1980s, numerous post-mortem and intraoperative descriptions revealed the common finding in middle aged elderly people of a pattern of cartilage lesions predominantly in the anteromedial aspect of the knee joint.

Few surgeons at the time were able to report clinical results and cumulative survival rates. General opinion at the time was that unicompartment operation is more difficult than the total knee replacement and therefore less successful in the hands of an average surgeon.

Popular neglect of the unicompartmental alternative resulted in a lack of innovation. The St Georg Sled (1969) and the Marmor (1972) prosthesis were both unicompartment knee prosthesis with a metal, polycentric femoral condyle and a polyethylene tibial component, both cemented to the bones. Initial problems were caused by wear distortion of thin (6mm) polyethylene components, which were subsequently abandoned in favour thicker ones. The persisting problem of deformation of the all polyethylene component led to the use of metal-backed tibial components, but this, in turn resulted in the diminished thickness of the polyethylene and sometimes further problems with wear.

In 1974 the first “Oxford knee” had a metal femoral component with a spherical of articular surface, and metallic tibial component which was flat and a polyethylene mobile bearing. The device was fully congruent to both interspaces throughout the range of movement. These features of the Oxford knee have remain unchanged in present day. At first, the implant was used bicompartmental knee, as a total joint replacement, but later it was used primarily for medial or lateral unicompartmental replacement. Thus, the Oxford knee became the first commercially, widespread unicompartment knee replacement available. Since then there have been various evolutions of the instrumentation and prosthesis, though the core principles have remained since its first initial version in 1974.

Many surgeons argue that the results of a partial knee replacement are more successful than the total knee replacement. Many surgeons who performed both procedures have found that the range of flexion is greater and gait is more normal, particularly in activities like stair climbing because of the biomechanics of the knee are more completely restored. This is largely function of the preservation of the anterior cruciate ligament. Of course during a total knee arthroplasty the anterior cruciate ligament sacrificed. Numerous joint registries, including the Swedish knee arthroplasty registry have consistently reported that the number of serious complications following a partial joint replacement, including infection blood transfusion medical problems are reduced. Furthermore the hospital length of stay is reduced making it more cost effective option when compared to total knee replacement.

Looking at the literature the revision rate for early mobile bearing prosthesis has generally been slightly higher than a fixed bearing, though with further evolution of the design and instrumentation it is possible that the revision rates of mobile bearing joint replacement will be reduced by reducing surgical errors during the intraoperative period.

The Oxford partial knee replacement has been successfully used for the treatment of anteromedial osteoarthritis of the knee. Since its initial introduction, there have been further developments in the operation technique, namely phase 1, phase 2 and subsequently the “Microplasty instrumentation”. With the introduction of each new “phase” incremental improvements have been made to the instrumentation and the prosthesis. The introduction of a twin peg femoral prosthesis (from a single peg) provided more stability and better fixation. The current Microplasty instrumentation creates fewer variables and a more predictable outcome. When using the microplasty instrumentation, the tibial cut is referenced off the femur and thus the surgeon does not need to estimate (eyeball) the initial tibial cut. This results in a more predictable, quicker procedure and better outcome.

Subsequent development of the “cementless” prosthesis offers further advantages. One technical difficulty in performing a cemented partial knee replacement is removal of excess cement, especially from the posterior aspect of the tibial tray. Residual cement can be a source of post-operative pain and potential wear. By introducing a cementless prosthesis both a step in the procedure which can be technically challenging has been removed as has one potential source of postoperative pain and wear.

It has been shown that in the hands of high-volume surgeons, the Oxford partial knee replacement can deliver excellent outcomes and demonstrate a survivorship rate of 98% at 10 years (1) with average wear rate of 0.03 mm/year.(2) The cementless prosthesis has demonstrated a lower revision rate than the cemented prosethesis.(3)

I am indebted to the late Professor James Richardson from The Robert Jone and Agnes Hunt Orthopaedic Hospital, Oswestry, both for teaching me this technique, one amongst many, and also for leaving such clear surgical images. This case was one of the very last he performed before his most untimely and unexpected death.