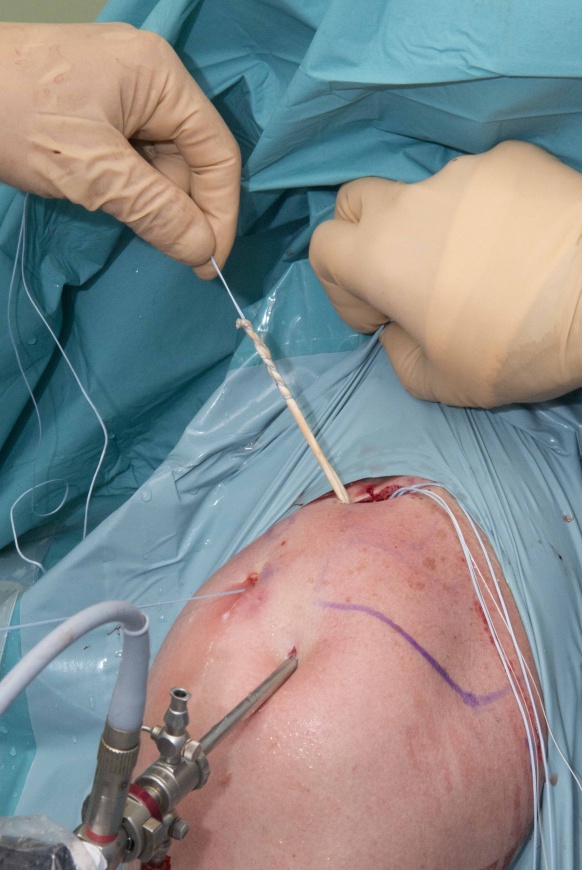 AC joint (ACJ) injuries are usefully classified using the Rockwood grading system, which considers the extent of injury to the ligamentous  structures that support the ACJ (the capsule; the coraco-clavicular (CC) ligaments, the extent of displacement, and the extent of shoulder girdle muscle stripping and interposition between the distal clavicle and the acromion process of the scapula; the grading is described in more detail in the Overview section of the Arethrex Tightrope technique, which can be found at Arthroscopic repair of acute Acromioclavicular Joint Separation with the Arthrex TightRope system

There are two separate elements of the CC ligament complex, the conoid ligament (which passes from the “knuckle” at the base of the coracoid to a broader insertion on the undersurface of the clavicle, like an upside-down cone, forming the postero-medial part of the CC ligament complex) and the trapezoid ligament (which is more of a sheet, passing antero-laterally from the upper border of the coracoid to the undersurface of the clavicle).

Grade I and II injuries are initially treated non-operatively in the anticipation of restoration of good function; residual local pain can be treated in the same way as degenerative ACJ conditions with steroid injections for symptomatic control or excision of the distal clavicle. Injuries with wider displacement of the distal clavicle or soft tissue interposition (grades IV, V, and VI) are best acutely treated operatively.

The management of grade III injuries remains controversial, with many surgeons performing surgery acutely in high-level athletes and manual labourers, to more reliably restore function at an earlier stage.

In chronic symptomatic ACJ separations the use of soft-tissue graft techniques can be desirable to promote biological neoligament formation; soft tissue grafts can also be used in acute cases.

Arthroscopically-assisted techniques can be used and offer the advantages of the opportunity to assess and if necessary address concomitant intra-articular injuries, less invasive surgical dissection and better cosmesis.

Reported complications include loss of ACJ reduction, fracturing of the clavicle and the coracoid, and hardware prominence with skin irritation.

This operative technique describes using a single suture-button system, with Fibertapes and Dog-bone buttons (Arthrex), which has a few distinct advantages.

A semitendinosus allograft is is looped around the clavicle and the coracoid to anatomically and biologically reconstruct the CC ligaments in all cases; by looping the graft around the coracoid base rather than passing it through bone tunnels, a larger diameter, and so stronger, graft can be used without risk of fracture through the bone tunnels that would have been needed for trans-osseous tendon allografting. The graft also covers over the superior clavicle button, so reducing hardware prominence.

My thanks to Mr Socrates Kalogrianitis FRCS (Tr & Orth) who is recorded performing this technique.