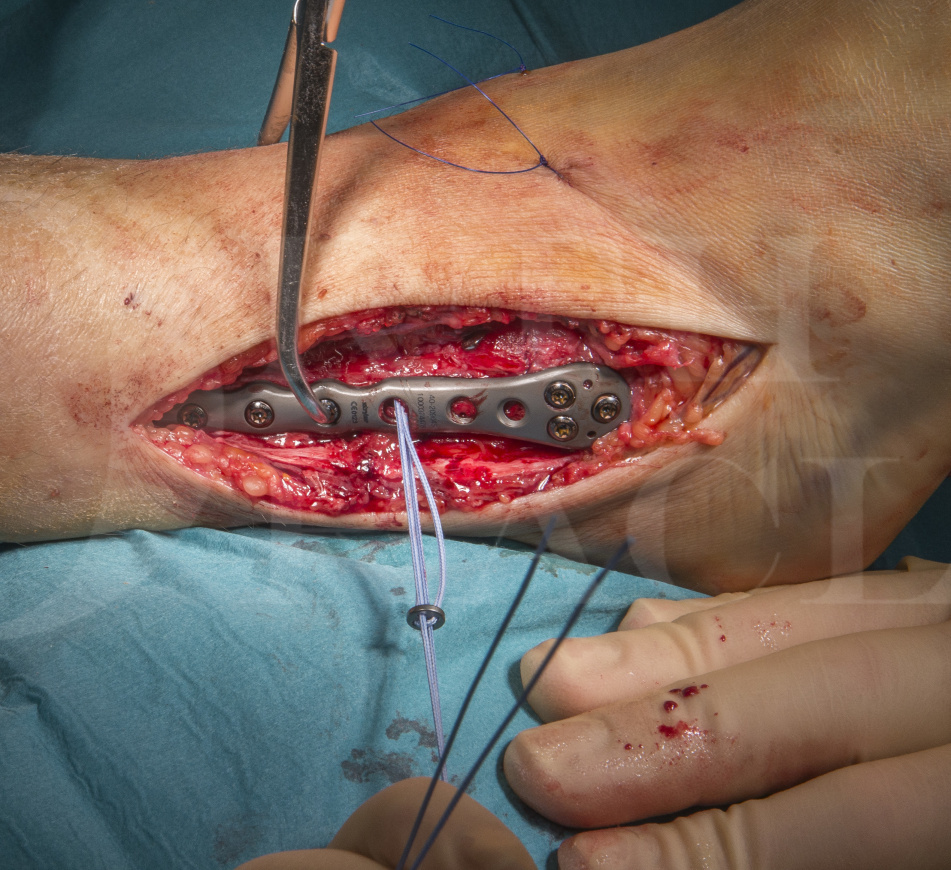 The distal tibiofibular syndesmosis is a unique syndesmotic joint, powerfully bound by a variety of ligaments to maintain the integrity of the ankle mortise. The distal anatomy of the two bones are created in such a way that the medial surface of the distal fibula fits into a groove on the lateral surface of the distal tibia called the incisura fibularis which offers the bony stability to this joint. The anterior part of this joint is stabilised by the Anterior Inferior Distal Tibio-Fibular ligament (AITFL), the posterior aspect by the Posterior Inferior Distal Tibio-Fibular ligament (PITFL) and the transverse Tibio-Fibular ligament. Directly between the contiguous surfaces of the tibia and fibula is the interosseous ligament which extends throughout the length of the fibula.

The PITFL is by far the strongest ligament in this complex and is the least likely to be ruptured. Once ruptured however it is most likely to be associated with severe rotational or dislocating injuries of the ankle and associated ankle instability.

The syndesmotic ligaments  stabilise the fibula with respect to both talus and tibia, whilst allowing a degree of rotation of the fibula, required in particular during full ankle dorsiflexion when the widest portion of the talus comes into the mortise. As with any ligament injury the key point is not solely whether these ligaments have been injured, but rather their stability in determining the need for treatment. If instability is not addressed, high contact pressures at the joints surface ensue and early degenerative change occurs in most patients.

Traditional fixation of unstable syndesmotic injuries has been with two parallel, non-compressive, small fragment screws placed across the ankle at the level of the tibial incisura. Such fixation also requires a decision as to whether the screws need to be removed and furthermore,  the optimal timing for such removal.

The use of a Arthrex tightrope implant, is far more physiological in terms of the way the syndesmosis is held, allowing more normal movement at the ankle mortise. It is a simple and ingenious implant that has proved its worth not only in syndesmotic ankle reconstruction but also in the shoulder and forefoot. It consists of two metal buttons that rest on the respective bony  surfaces to be approximated, and a robust four stranded Fibrewire suture construct which links these buttons. The design allows easy apposition of the buttons towards each other by the effective “slip-knot” set up of the suture strands.

Readers will also find of use the following OrthOracle techniques:

Fusion of the syndesmosis for isolated distal tibio-fibular arthritis