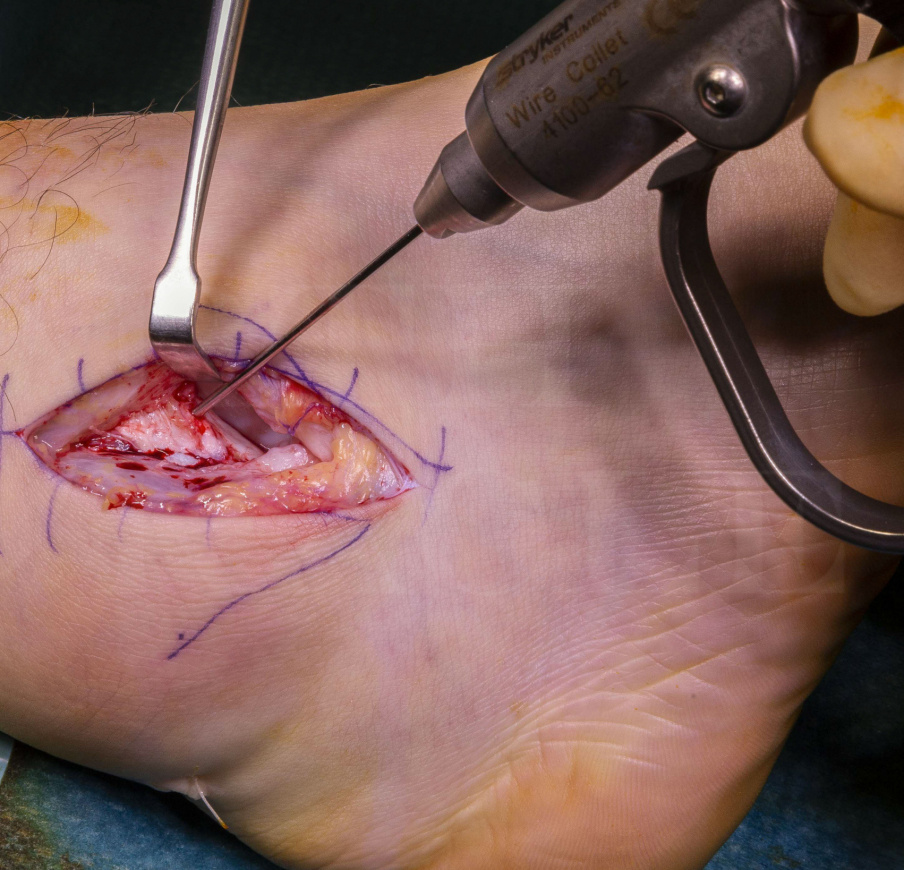 A lateral ligament repair of the ankle is performed for symptomatic and recurrent ankle instability, either due to ATFL (anterior talofibular ligament) laxity or CFL (calcaneofibular ligament) laxity or both, that has failed conservative management.  Conservative management itself has low failure rates, if patients follow a structured rehabilitation programme under the guidance of a physiotherapist. In the small percentage of patients that fail and continue to have ankle instability, surgery is indicated.

It is important to appreciate that symptomatic ankle instability is more often due to functional instability, resulting from weakness and/or painful intra-articular pathology rather than mechanical instability due to lateral ligament laxity.

Therefore a thorough clinical history and assessment is essential.   The MRI findings may add to the diagnosis but it’s important to emphasise that instability or ligament laxity cannot be diagnosed on MRI scans. It is a clinical diagnosis based on history and thorough examination findings.

The original Brostrom procedure defines a mid-substance repair of the ligaments, where the tissues are sutured back tighter or double-breasted.   The term Brostrom is now applied more loosely often being used to describe an operation where the ligaments are detached from the fibula and then reattached in tension. The original procedure was first described by Brostrum and was later modified by Gould, whereby the extensor retinaculum was included in the repair as an extra soft tissue restraint.

The surgery is performed through a small incision of approximately 6 cm over the distal fibula, either longitudinally or transversely.  The ligaments are carefully exposed, elevated from the fibula and then carefully reattached. This is usually done with suture anchors, screwed into the distal fibula.   I prefer to use the twin-fix anchors from Smith & Nephew.   These are small metal cones that are screwed into the distal fibula, with two double ended loops of suture passing through them.  They rarely cause any problem with later MRI scans, producing only a small local area of interference .

This type of surgery is often performed in conjunction with other procedures such as ankle arthroscopy, hindfoot realignment surgery, or during ankle arthroplasty.   Many surgeons will perform an arthroscopy at the same time as a ligament repair, as there is often other intra-articular pathology that isn’t apparent on an ankle MRI.   In my opinion, if there is a history of instability with isolated examination findings of ligament laxity and no sign of intra-articular pathology on MRI, then an arthroscopy is not needed.

Very occasionally, the natural soft tissues are inadequate and a competent ligament reconstruction is not possible. This is most likely to happen in revision cases or cases of underlying collagen deficiencies such as joint Hypermobility or Marfans syndrome. These cases need to be indentified pre-operatively and treated with alternative operative techniques that do not rely on the original ligament tissue. Examples are using synthetic ligaments that can be used to augment the repair such as the “Internal Brace” by Arthrex or a transferring the peroneus brevis, or part of it, as a tenodesis through a fibula bone tunnel, in a non-anatomical repair such as an Evans or Chrismann-Snook technique.

The outcomes of lateral ligament repair are excellent with very high rates of return to full function.  However, without good function of the stabilising muscles (especially peroneal muscles), any ligament stabilisation procedure will fail. Therefore, it’s essential that the patients undergo an intensive and structured rehabilitation program following surgery – It’s even better if the patient is enrolled in pre-surgical rehabilitation or “Prehab” – Not only will the recovery be better because there is less negative impact from the surgery but also the patient is familiar with the exercises and so can accelerate their recovery quicker