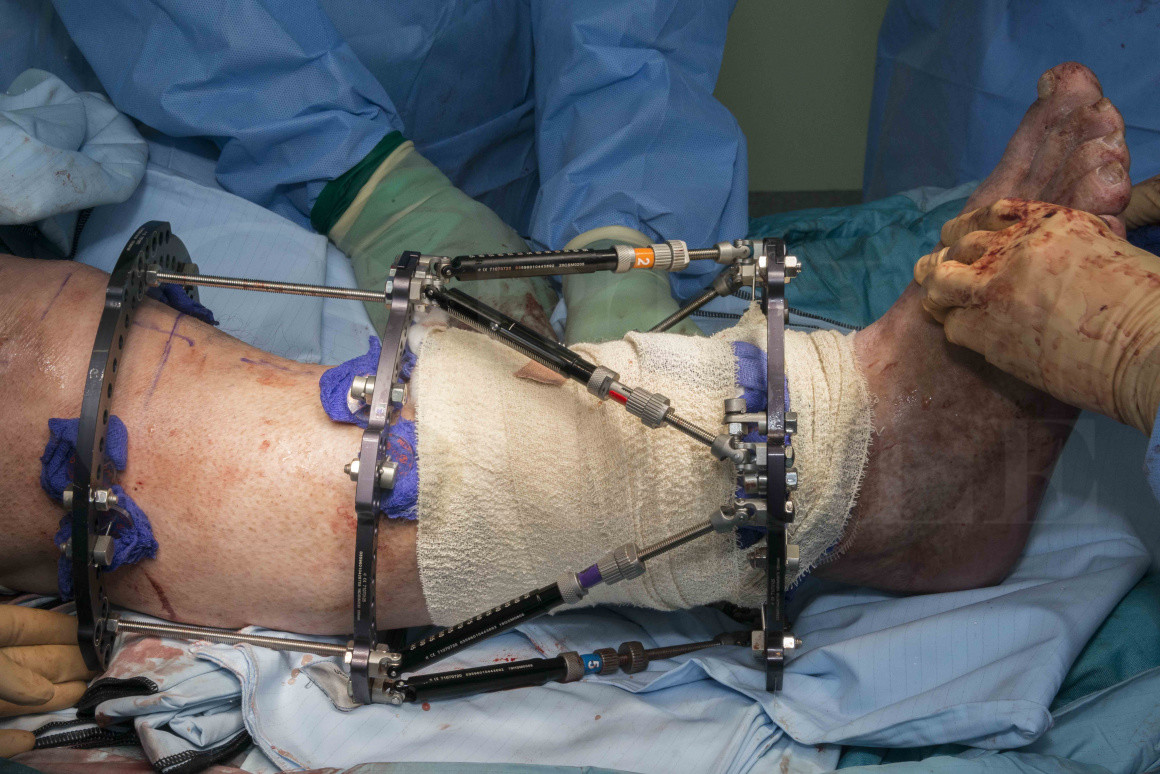 Tibial non-union occurs in approximately 5% of fractures although rates are higher following open fractures with an incidence of up to 40% in Gustilo-Anderson 3B open tibial fractures.

There is no agreed radiological definition of non-union although the  RUST system (Radiological Union Score of Tibia) can be used as a guide. AP and lateral x-rays  are assessed with each of the four visible cortices given a score from 1-3 (1- no callus, 2- bridging callus, 3- bridging callus fracture not visible) with a score of 10 or more representing radiological union.  An often quoted definition of non-union is a fracture that has not healed by 9 months or has shown no progression of healing on X-rays taken 3 months apart. However many open fractures take over 9 months to heal and often fractures that are slow to heal need nothing more than time to achieve union.  A pragmatic (although subjective) definition of non-union therefore is an absence of healing radiologically with ongoing symptoms where union is not anticipated without further intervention.

Non-union can be classified in a number of ways. The commonest is to divide them into hypertrophic, oligotrophic or atrophic.  In hypertrophic non-union there is callus formation but persistence of the fracture and the primary issue is considered to be mechanical with inadequate stability.  In atrophic non-union there is minimal callus formation and the underlying issue is biological (non-viable bone ends, poor vascularity).  Oligotrophic non-unions sit between the two extremes with a mixture of biological and mechanical causes.  Non-unions with infection or bone loss are separate entities.

Non-union can be due to a multitude of factors and the management is tailored to addressing those factors.  Patient factors include medical conditions such as vascular disease and diabetes with poor control or complications.  Smoking is a well recognised cause of complications after fracture fixation with an increased time to union and significantly increased risk of non-union.  Endocrine abnormalities, such as hypothyroidism may contribute to non-union and vitamin D deficiency is a common finding in those with non-union although it is uncertain if this is causative and whether correction of vitamin D improves healing.  A number of drugs are considered to impair bone healing including steroids.  Non-steroidal anti-inflammatories (NSAID’s) have long been blamed for impairing bone healing however there is a lack of good quality evidence demonstrating that NSAID use causes non-union (rather than patients with non-union taking NSAID’s because their leg hurts).

In addition to patient factors a number of factors relating to the fracture and its treatment may contribute to the development of non-union.  These can be thought of in terms of 4 S’s.

Ring fixators are used in tibial non-unions for a variety of indications.  They can be used simply to add stability to a hypertrophic non-union, as distraction in a frame is a reliable way of reducing strain at the fracture site and achieving union. They are particularly useful in cases where infection is confirmed or suspected, the small foot print of the frame avoids having metalwork in an infected field.  Intercurrent deformity can be addressed with ring fixators allowing a gradual deformity correction which avoids placing undue stress on soft tissues and particularly when acute correction may stretch nerves too rapidly and cause a nerve injury.

The Taylor Spatial frame (TSF) uses six adjustable struts across the working segment, in place of the traditional Ilizarov threaded rods, to create a hexapod. The hexapod is an engineering concept, the use of 6 adjustable struts allows deformity correction in any plane.  This concept is based on the Stewart Gough platform and in combination with the software allows the frame to be programmed to simultaneously correct deformity in any plane via a ‘virtual hinge’.  The TSF is thus a powerful tool for correcting complex deformities as well as sharing the advantages of traditional Ilizarov frames in the treatment of infected non-unions.

Readers will find the following OrthOracle techniques also of interest: