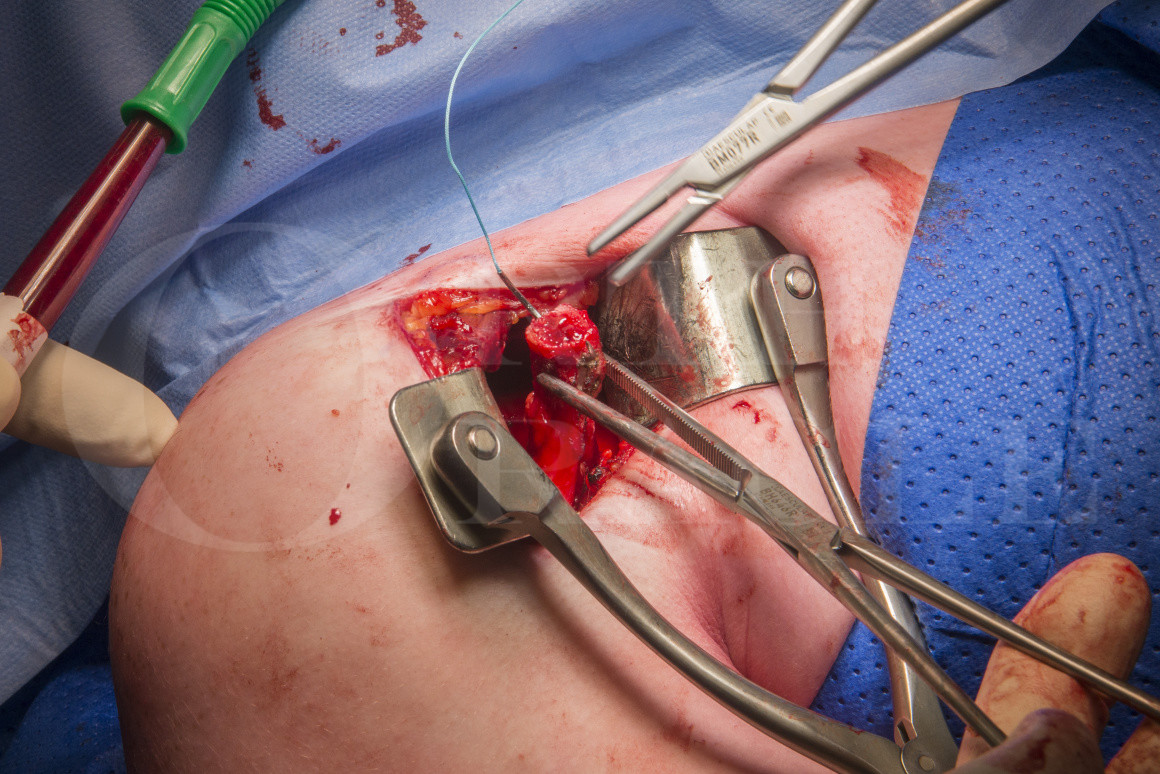 Described here is my surgical technique for the open modified Latarjet coracoid bone block transfer anterior stabilisation of the shoulder.  This operation was originally described by the Frenchman Latarjet in the 1960s for the treatment of shoulder instability.  Some surgeons around the world use this as their primary operation for patients with recurrent shoulder instability regardless of whether there is bone loss or not. The majority will use it only in patients with anterior glenoid bone loss identified on the preoperative imaging or as a revision procedure for failed soft tissue repair stabilisation. I have described it, and perform it, in a form modified from the original because there have been a number of well established improvements made over the years to the original technique.

The principle behind the operation is to replace the anterior glenoid bone lost, due to recurrent trauma from the humeral head during dislocations, with bone.  Whilst this can be achieved by using autograft such as free iliac crest bone graft or allograft (techniques have been described using distal tibial plafond from fresh frozen cadaveric donor) but this technique uses the native coracoid process, keeping its conjoint tendon attached.

Once the decision has been made to use the technique for either primary or revision surgery then an anterior deltopectoral approach is used.  Once the coracoid bone graft is harvested it is rotated through a split in subscapularis and fixed onto the prepared anterior glenoid with two partially threaded cancellous screws.  This technique describes repair of the capsulolabral soft tissues to the native glenoid on the inside of the graft.

The modified technique described here uses the congruent arc Latarjet procedure, in which the curvature of the undersurface of the coracoid which matches neatly to the concavity of the glenoid socket.  The cut bony surface on the medial aspect of the coracoid is created by detaching pectoralis minor with a slither of bone.  This cut bony surface is then rotated to be seated onto the prepared bony surface of the anterior glenoid.  This differs from the traditional or classic Latarjet technique where the entire coracoid process is harvested and then the undersurface is decorticated to be placed flat onto the glenoid surface.  This technique then allowed repair of the capsular labral structures to a stump of the coracoid acromion ligament left on the lateral edge of the coracoid autograft.

In recent years arthroscopic variations of this operation have been described.  These arthroscopic techniques however often ignore the repair of the soft tissues of the capsular labral complex.  There is also no doubt that even for the most experienced arthroscopist this is significantly complex and challenging surgery .

All Latarjet techniques utilise the conjoint tendon attached to the tip of the coracoid to act as a sling, thus reproducing the function of the damaged anterior band of the inferior glenohumeral ligament.  As the repaired shoulder rotates into abduction and external rotation the position of the conjoint tendon tightens with a tenodesis effect to further prevent anterior translation of the proximal humerus over the glenoid.

The technique I describe here, I believe is safe, reproducible and gives really very good results of stabilising a shoulder.  There have been several publications highlighting potential risks and complications of the Latarjet stabilisation technique but I believe that the technique described here when used regularly and carefully is at low risk of producing such complications.