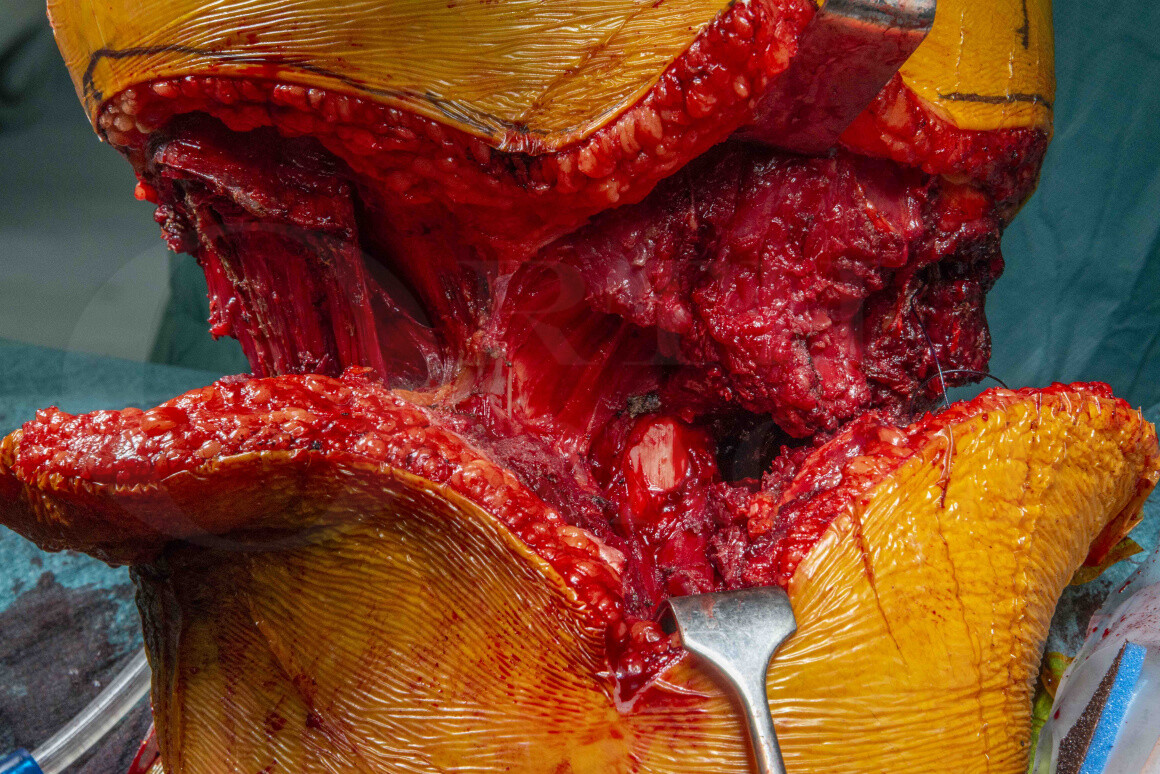 Osteochondromas represent approximately 1/3 of all benign bone tumours. They are an exostosis of bone that is covered by cartilage on its external surface. They typically present in the second or third decades of life and most frequently effect the appendicular skeleton, with the lower-limbs more commonly effected. They may be solitary or multiple hereditary osteochondromas. The risk of sarcomatous change is rare, seen in approximately 1% of solitary osteochondromas, with rates of 2-5% seen in hereditary multiple osteochrondromatosis (as in this case). Although classically osteochondromas are encountered in the metaphyseal region of appendicular long bones, axial tumours of the pelvis, spine, ribs, and scapula.

Surgery for benign osteochondromas should be avoided and only performed if they cause pain, decreased range of motion, pressure on neurovascular structures, tendon irritation or significant bursal formation. Clearly any clinical, pathological or radiological evidence of malignant transformation is an indication for wide ‘en-bloc‘ resection of a chondrosarcoma.

In this case a young male patient suffered pain and limitation of movement as the osteochondroma started to enlarge years after skeletal maturity, a concerning feature of malignant transformation. An MRI pre-operatively had suggested  malignant transformation had occurred and the biopsy confirmed a high grade chondrosarcoma arising in a pre-existing osteochondroma (a peripheral chondrosarcoma).

Biopsies of chondrosarcomas are subject to sampling error as unfortunately chondrosarcomas are not homogenous, and consequently high grade chondrosarcomas when carefully scrutinised after resection will have benign, low-grade and high-grade areas all within the same tumour, thus biopsy is considered unreliable. This has been reported by multiple research teams (Laitinen MK, Stevenson JD, Parry MC, Sumathi V, Grimer RJ, Jeys LM. The role of grade in local recurrence and the disease-specific survival in chondrosarcomas. Bone Joint J. 2018 May 1;100-B(5):662-666. doi: 10.1302/0301-620X.100B5.BJJ-2017-1243.R1. PMID: 29701096).

The sarcoma MDT took the view that given the clinical, pathological and radiological features were consistent with high-grade peripheral chondrosarcoma that en-bloc excision was indicated for local control of the tumour, but that due to the extreme size of the tumour and the neurovascular involvement of the tumour that transfemoral amputation was indicated, which is not associated with significant functional differences than in matched cohorts (Hoffman RD, Saltzman LC, Buckwalter JA, Outcome of lower extremity malignancy survivors treated with transfemoral amputation, Archives of Physical Medicine and Rehabilitation. 2002;83(2):177-182. https://doi.org/10.1053/apmr.2002.27461).